He's traded his nerdy image for a much flashier persona, and his music's become a lot glossier, too, but NOW readers' pick for best local male vocalist says that's the way he planned it. 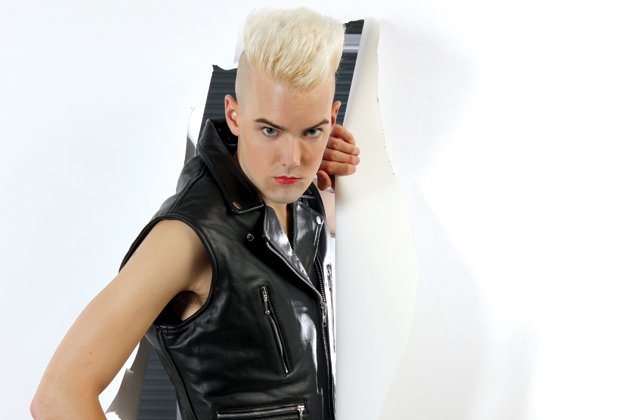 To all the NOW readers who voted Diamond Rings Toronto’s best male vocalist for 2012, we have some bad news for you: you’re going to have to share him.

“I wouldn’t be where I am without all that,” says a triumphant O’Regan, bursting with manic enthusiasm despite his sleep deprivation, at the Drake Sky Yard. “But the irony is that I’m hardly ever here any more.”

If not for NOW’s Best of T.O. poll, O’Regan would be enjoying a rare day off after a gruelling 23-date U.S. tour opening for Stars. Instead, we’ve summoned him back to Toronto to accept his award with an exclusive photo shoot. And so, on the release day for Free Dimensional, his long-awaited second Diamond Rings album, he’s celebrating on just a few hours’ rest. Fully garbed in Bowie-meets-Max Headroom glory, he’s stealing furtive sips of a congratulatory Chet Baker cocktail between interview questions.

Not that he’s complaining. This is what he’s signed on for. Since trading his glasses, flannel and guitar for rainbow mascara, leather tights and 808 samples, O’Regan has been rapidly approaching legitimate pop stardom.

He started Diamond Rings in the summer of 2009 as an offshoot of his main gig fronting hyperactive art punks the D’Urbervilles (since renamed Matters) with a no-budget video for his no-budget single All Yr Songs. When the YouTube embed found its way onto Pitchfork, his 300 hand-pressed 7-inch singles were quickly snapped up, and his local shows started selling out. O’Regan soon realized he had more than a side project.

Three high-profile opening slots (Robyn, Twin Shadow and Stars), a boatload of hype and a best-new-artist Juno nomination later, he’s signed with a major label (Astralwerks, a subsidiary of EMI) and has mounted the iconic stage of Ed Sullivan Theater to perform on The Late Show With David Letterman.

Diamond Rings may have started as a gangly indie rock nerd’s fish-out-of-water version of pop stardom, but it’s looking more and more like O’Regan has successfully bluffed his way into the mainstream.

He once called himself “a pop star with one hand tied behind my back.” When I ask him if the statement still applies, he throws his head back and laughs.

“Oh, I’ve definitely got both hands in the game now,” he says.

Diamond Rings’ debut LP, Special Affections, was limited by what he and co-producer Jamie Bunton could create on his MacBook with a handful of keyboards, synths, guitars and a working beginner’s knowledge of GarageBand.

Free Dimensional, on the other hand, noticeably wears an increased sense of confidence, a greater familiarity with the studio and a healthy financial advance from his label. That’s certainly not uncommon for a major label pop album or for an artist pushing for a larger audience, but it’s bound to disappoint fans of his scrappy DIY lo-fi approach to electronic music.

“Sure, some people are going to be put off by how the record sounds, but that was going to happen no matter what,” says O’Regan.

“Anybody who has seen my progression as an artist in the last couple of years and has taken the time to listen to the album should be able to recognize that what I’m doing on Free Dimensional is not really as much of a departure as it might seem. It’s maybe a departure sonically, but not spiritually.”

There’s no question the album is glossier than its predecessor, its lyrics more relatable and the hooks more immediate, but O’Regan still approached the album primarily as an artist. He doesn’t see the three-and-a-half-minute single as a window to commercial success, but as “a difficult code to crack.” Achieving the effortless-sounding precision of a good pop song, O’Regan notes, actually takes a lot of thought.

“The hardest thing in the world is being able to convey something lyrically that feels poetic and poignant but is also really direct, clear and relatable,” he explains. “To do that without being cheesy, without being the kind of artist where people can rhyme the lines before you say them because they’re just so basic and boring, that’s really hard.”

While Diamond Rings was once a one-man show, he now has a band of players behind him, allowing him to focus on his over-the-top performance and dance moves. They may be dressed in identical Diamond Rings jackets (“All my favourite outfits have outfits,” says O’Regan), but Greg Santilly is easily recognizable as the drummer from Matters, while guitarist Graham Van Pelt is the man behind Montreal electro-pop outfit Miracle Fortress.

O’Regan’s American label, Astralwerks, gave him the freedom to achieve his goal the same way he always has: by his own means. Though the label is home to star-making producer David Guetta, O’Regan co-produced with Montreal-based Damian Taylor. Though Taylor has produced big artists like Björk and the Killers, O’Regan was more attracted to his work with Toronto synth-rockers Austra.

Many people have a vested interest in turning Diamond Rings into an international band and an international brand, but it’s still very much a product of the Toronto scene O’Regan moved into after finishing his degree at the University of Guelph.

“The first video from this album [I’m Just Me] came out, and some people were put off by the fact that it had a bit of a sheen,” he says. “It did, of course, but the funny thing is that every single person involved – John Caffery from Kids on TV choreographing, House of Monroe voguing, Jared [Raab] directing, Lisa [Howard] doing makeup, Norman Wong doing the album photo – has been on this journey with me since the beginning. In the same way that I’ve grown and progressed as an artist and writer, they’ve grown and progressed as directors, photographers, makeup artists and dancers.”

So while he’s definitely making a push beyond his home scene, he’s bringing the scene with him.

“I can’t help but look at it like that,” says O’Regan. “I loved spending days mailing 7-inches out of my room, but now it’s nice to be able to use those days to write more songs.”

John O’Regan explains how and why he’s given up being “lo-fi.”

Diamond Rings was originally a staunchly a one-man operation, but O’Regan has recently expanded it into a full band. Here, he explains how opening for Swedish pop-singer Robyn helped him change his mind.

Though breakout success has always been the goal, O’Regan is ambivalent about his growing disconnect from his home scene. As an example, he examines his changing relationship with Katie Stelmanis of Austra.