Did I break up Broken Social Scene?

Toronto's biggest band is going on hiatus. Could this be because of a public spat this year? 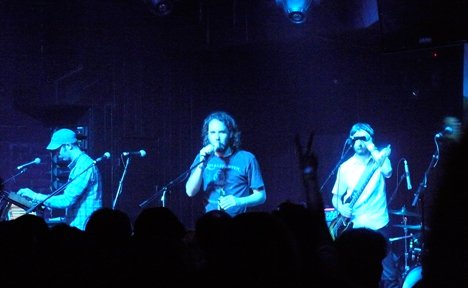 “Now’s the time [to stop] because there are other projects that people want to pursue, and we feel that we’ve done what we wanted to do. I think we’ve really gone as far as we can with playing these tunes. It comes down to Kenny Rogers: ‘You got to know when to hold ’em and when to fold ’em.'”

Given their loose membership policy and myriad strong personalities, the breakup talk doesn’t come as much of a shock. Broken Social Scene have always seem poised on the edge of breakup (hell, it’s right there in the name). All they’ve needed was something to push them. And though they’re citing an interest in outside music projects, film and, um, beef tenderloin, it’s not hard to wonder if there were other factors in play.

In an interview I did with Andrew Whiteman back in July, the guitarist slammed the band’s own video for the song Sweetest Kill, calling the treatment, in which actress Bijoux Phillips graphically murders her lover, “fucking literalist bullshit.”

Naturally, this didn’t sit well with the rest of the band. In a later video interview, Kevin Drew fired back, distancing the band from the opinion of its guitarist:

“[Director] Claire [Edmonson] sort of got hung out to dry by our camp — that’s not our camp. Andrew’s entitled to his opinions. He plays guitar with us, I love him like a brother, but he was wrong to do that publicly. He knows it. We know it.”

So did I break up Broken Social Scene?

Well, that might be a bit of a stretch. But it is interesting to note that in the same Spinner interview, Whiteman claimed they’d be thinking about new writing new material in September and embarking on the next album cycle. Instead, Drew has set up their final tour stop in San Francisco on October 1 as their “last show” at least for the foreseeable future.

Then again, Broken Social Scene seems to play more “last shows” then some bands play shows, period. Back in 2004, the band appeared on the cover of NOW with the claim that their then upcoming concert, a homecoming show at the Harbourfront Centre, would be their final. Over seven years later, things are sounding awfully familiar.

So for those of you lamenting the end of a longstanding Toronto indie rock collective, hold back your tears. We get the feeling we haven’t seen the last of Broken Social Scene.