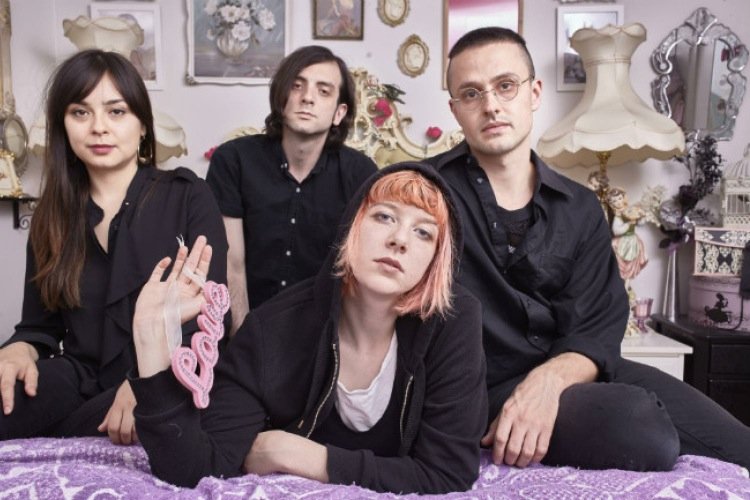 The first thing you notice about Dilly Dally’s sound is Katie Monks’s voice: a hoarse, utterly captivating drawl that can unleash throat-tearing screams as easily as tender, wounded melodies.

The first thing you notice about Dilly Dally when you meet them is also Katie Monks. At a Kensington café on the hottest day of summer, she stands at the second-floor window hollering at the top of her lungs to her bandmates Liz Ball and Jimmy Tony on the sidewalk.

There isn’t any real need to yell, of course. The band knows this is the meeting place. Surely they’ll find us inside. But Monks is in quasi-performance mode even offstage and has an endearingly unfiltered and messy emotionalism about her.

Once the members of the Toronto four-piece – including Benjamin Reinhartz – are settled around the table, she still draws all the attention despite being scrunched up inside her big T-shirt, slouched low in her chair, eyes averted. She has lots to say.

It takes just a question or two about the band’s searing debut album, Sore, out on Buzz Records on October 9 digitally and on vinyl October 30, to see that she’s all ambition when it comes to Dilly Dally, which she started six years ago with guitarist Ball.

When asked why their first album never came out and was instead released as digital singles, Monks says, “Because no one wanted to put it out. We didn’t want to just throw it up online ourselves. When we release something, we want it to be epic.”

“We’re more about, I don’t want to say ‘quality over quantity’ because I’m not going to sit here and say” – Monks puts on a snooty voice – “‘the quality of the new record is….’ But when we do something, we mean it. When we release something and make a big deal out of it, it’s because that record is a huge deal to us and an intentional statement.”

Indeed, the forthcoming Sore packs a wallop. Take first single Desire, which, after a few seconds of shoegaze guitar blur and Monks’s shredded voice counting off “1, 2, 3, 4” coalesces into a perfect slice of colourful pop-grunge indebted to My Bloody Valentine and the Breeders.

Just-released second single Purple Rage trades Desire’s hugely effective under-layers of sultry cooing for something angrier. “Don’t know me, you don’t know me,” Monks mumbles as the music wails and careens behind her.

“How our songwriting has changed [since our EPs] is in the sense of urgency,” Monks says. “Me and Liz have been working on music for a really long time, playing shows once a month in Toronto for the last six years. There have been so many opportunities that presented themselves that just got smushed in the dirt. I hit a point some time last year where I was like, ‘I don’t want anyone to ever not get what this band is about again.’

“There’s a frustrating element of releasing music and it getting lost in translation and then seeing people write whatever they want about it. It’s frustrating to see your message get skewed and twisted or conveyed in ways that are alien to you. So I wanted to say it clearer and do better. I wanted things to be cohesive and clear and abrasive. I feel like we’ve been fighting to be heard. That aggression is all over the record.”

Initial buzz about Sore suggests that the payoff is around the corner. Actually, payoff has already been arriving. Last year’s addition of drummer Reinhartz and bass player Tony brought a major energy burst. “It was like when you first start dating somebody,” says Monks. “The feeling was so incredible and exciting, this new conversation and language we were all able to tap into.”

Songs for the record came fast. Shows got more powerful. Then came Pitchfork shout-outs and gigs in rooms bigger than the Silver Dollar, where they typically play.

The band’s newfound buzz parallels the growing renown of the larger loud-rock DIY scene they’re a part of, one that also has big ambitions. Dilly Dally’s primary recording team is Josh Korody of Candle Recording and Leon Taheny, whose completely stunning Union Sound Company has already pumped out recordings for METZ, Princess Century and 50 or so others since it opened in May. (It’s where Dilly Dally made Sore.)

And the aptly named Buzz Records label they’re attached to is not only releasing full-lengths this fall by HSY, Fake Palms, the Beverleys, an EP by Greys and singles from Twist and Bad Channels in addition to Dilly Dally’s record, it has also launched a sister booking agency, Beeswax, led by Denholm Whale of Odonis Odonis and Shehzaad Jiwani of Greys, and Hive Mind PR, run by Tom Avis of Blonde Elvis and Annabelle Lee of Mexican Slang.

“Beeswax was initially conceived as a way to support the baby bands on our roster without an agent,” explains Buzz “overlord” Ian Chai. “As time passed, Den and Shehz’s efforts genuinely began to outstrip the work of the bigger agencies, which have completely abandoned the notion of artist development. Now it’s attracting clients from outside the Buzz orbit.

“And Hive Mind makes use of the network we’ve all developed as touring musicians. Essentially we’re trying to control the means of production and re-conceptualize what DIY can mean in 2015. We’re not trying to break down any doors – we’re building our own house.”

Back at the café, we talk about all of these activities.

“Buzz has put a lot of time and work into all their bands big and small,” says Tony, who also plays in Mexican Slang. “I think it’s starting to pay off because they’re just really dedicated.”

“Everyone is totally feeding off each other,” says Monks. “It’s been said before that Toronto kind of needed this stuff to happen. METZ have been a part of it, too. They dropped a bomb on the industry and drew attention to heavier music in Toronto. Before that, things were getting a little boring here.”

We circle back to the subject of ambition. Monks talks about the demos she used to make in her bedroom as a teenager, singing freestyle for three hours straight, letting whatever needed to come out bubble up from her subconscious. “It was pretty spiritual,” she recalls.

Ball did this, too, making a fake wireless mic and singing along to Spice Girls and Britney Spears songs. Years later, when they started Dilly Dally in their early 20s, they went into it with an all-or-nothing attitude, even though it was unspoken.

She grows momentarily self-conscious, tugging at the ends of her pink hair.

“When I was a teenager and his band was doing really well, he wasn’t really around. But the one thing his experience has given me is hope and belief and faith in myself and in the world and in the fact that this is possible – a real thing you can do with your life. It’s not a waste of time. It’s not just aimless dreaming. It’s a realistic goal.”