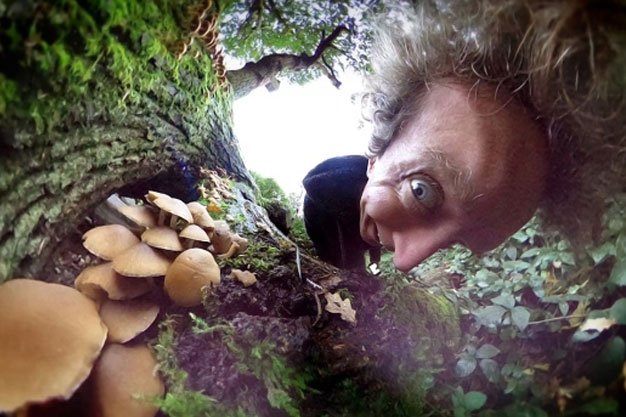 Tim Grabham has been staring into a lot of petri dishes lately. But it’s for a very good reason. He and his co-director, Jasper Sharp, have been making a trippy documentary about plasmodial slime moulds and the unfamiliar world of mycology.

In The Creeping Garden, Grabham (whose previous doc, KanZeOn, was a similarly impressionistic voyage through Japanese spirituality) blends scientific inquiry and playful macrophotography montages to create a sort of meditative cinematic space. When we sit down the day of its Hot Docs premiere, I ask how he knew he could go as far as he did with it.

“I saw it as rather conventional compared to what I normally like to do,” he says with a laugh. “When I was watching the [rough] cuts I’d think, ‘Oh god, this is so conventional, it feels like a TV show.’ And then I’d turn on some TV shows to get a frame of reference, and I’d go, ‘No, it’s not actually.’ I was watching BBC4 stuff, and as good as that is in its context, it’s unbelievably didactic and unbelievably narrator-led. They really do just feed you stuff. There’s no room for abstraction or any sort of meandering.”

Much like its sprawling, jellylike subject, The Creeping Garden is an amorphous sort of creature. It regards slime moulds with curiosity and even wonder, inviting us to consider how different such life forms are from what we understand.

“You can’t make medicines from it you can’t cure people of diseases with it,” he says. “It’s not gonna be something you’re gonna get any kind of money to study. The only study is if you use it as a sort of model organism – which you see in the film with the guy who’s using it to help build biocomputers.”

The more scientists Grabham and Sharp talked to, the murkier their subject became.

“Someone in the film says it really well,” Grabham says. “They say, ‘There are no species in nature. We’ve given them all names, we’ve categorized everything. Nature doesn’t work like that. It’s far more free-form and abstract than we’d like it to be.’ And if we can’t categorize things, we have real issues: ‘Why can’t I put it in that box?’ The slime mould’s one of those weird things that’s hard to put in a box. It keeps changing the box it’s in anyway. It used to be in the fungus box, and then of course it was discovered that it’s not a fungus. Now it’s like this inconvenient relative that doesn’t quite fit anywhere.”

I feel like I need to ask the sci-fi question: is plasmodial slime mould going to eat us, as prophesied in various monster movies and that X-Files episode with the fungus field?

“No, I don’t think it has the capacity to do that,” Grabham laughs, pointing out that the biggest slime mould is only 14 or 15 inches across. “It’s not going to do anything. It’s harmless.”

And that leads us back to the tone of The Creeping Garden, which Grabham describes as the kind of documentary he’d want to watch himself.

“I want to feel involved in the film, like I’ve got a part in it and I’m not just getting everything given to me,” he says. “I think it’s much more interesting if you give the audience a lot of space to think about things, a bit of ambiguity.”