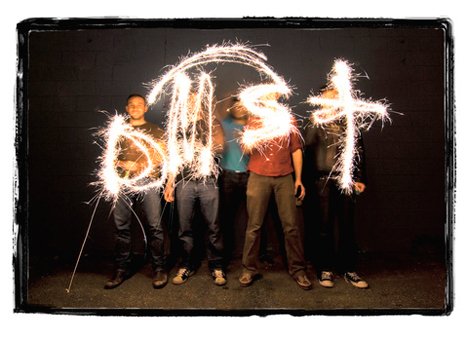 The Bicycle Film Festival kicked off Wednesday night in Toronto at the Polish Combatants Hall with a gig by local space rock heroes Do Make Say Think. For those of you wondering, the Bicycle Film Fest is an annual festival of films about bikes, and over the past 9 years has expanded to events in 39 cities around the world.

At one point during the show, guitarist Justin Small told the audience about breaking his collar bone in a bike accident a few years ago, reminding the crowd that wearing a helmet may have saved his life that night (although the incident did force him to cancel some shows with his other band, Lullabye Arkestra).

DMST have a new album coming out in the fall called Other Truths on Constellation Records, and they took the opportunity to give a sneak preview of one of the tracks. Word is that Other Truths is only four songs, although you can assume that these are very long songs in the vein of the clip below.