Pay no attention to the lobbyists behind the curtain

The campaign to rebuild the Gardiner is a highly organized, choreographed affair 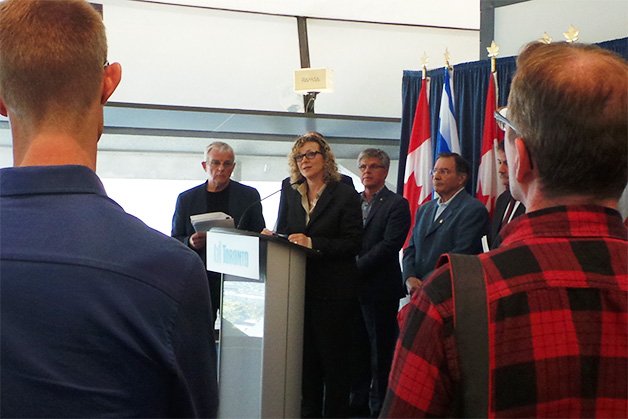 Councillor Jaye Robinson answers questions from the Globe's Oliver Moore (left) and the Star's Dave Rider (right). The guy with the stack of papers is planner John van Nostrand.

This week, city council will decide what to do with the Gardiner.

Toronto’s chief planner, Jennifer Keesmaat, thinks that it should be taken down east of Jarvis and replaced with a ground-level boulevard. Every living person who’s previously held her job agrees.

So do Waterfront Toronto, the Council for Canadian Urbanism, the Congress for the New Urbanism, Richard Florida, David Crombie and a whole bunch of major developers. The city’s medical officer of health says taking it down would be better for the environment.

City staff recommended removal in their February 2014 report [pdf], even if their latest is officially indifferent. (Council is divided down the middle, though the public at large prefers the tear-down.)

Early last week, around the time people started questioning whether there were any subject-matter experts who prefer rebuilding the highway, John van Nostrand popped his head up. A respected planner and architect who once designed a vision for the Gardiner that was never built, the planningAlliance principal is a passionate champion of the status quo.

So at a Thursday afternoon press conference organized by Public Works and Infrastructure Committee chair Jaye Robinson, van Nostrand was trotted out to make his case. He didn’t do so well, in a lengthy speech that included the dubious claim that crossing Lake Shore under the Gardiner is fine for pedestrians as it is, e.g.:

Reporters were skeptical, not just of his arguments but also about where he came from and whether he’s isn’t just a chess piece in the coordinated campaign to keep the thing up. A group calling itself the Coalition in Support of East Gardiner Hybrid Renewal — composed of the CAA, Ontario Trucking Association, Financial District BIA and similar interests — is pushing to rebuilding the highway, with assistance from lobbying firm StrategyCorp.

One of partners at StrategyCorp is John Duffy, who helped run Tory’s mayoral campaign and has been lobbying councillors and the mayor’s office on this issue on behalf of developer First Gulf. (He had also recently planned an astroturf group in support of SmartTrack, but that’s no longer happening.) One of the firm’s senior consultants is Courtney Glen, the deputy communications director on Tory’s campaign, who’s also been lobbying councillors on the Gardiner, as well as working for the industry coalition that wants to keep it.

So what is van Nostrand’s connection to them?

In an increasingly testy exchange during the presser’s Q&A section, reporters tried to find out:

(This has only very slightly been edited.)

The Star’s David Rider: The current chief planner and all the living ex-chief planners of the city disagree with you. They say the boulevard is better for the city. Why should we believe you?

John van Nostrand: Because I’m a planner, too, and I’ve been working at this for 40 years in the city. My grandfather was a city surveyor. He surveyed this plaza out here (gestures toward Nathan Phillips Square). I’ve been looking at infrastruc—

Rider: But they’ve been studying it for years, too.

van Nostrand (getting irritated): You know what, those planners haven’t been looking at public infrastructure! They’ve been looking at creating communities that look good. Nobody’s been addressing engineering infrastructure other than the engineering department, which is why we got a problem. Because it wasn’t balanced. My thesis was on the intersection of 401 and 427 in 1972. And I’ve been working from that point on the infrastructure of this city. I’m a planner and an architect. I’m a fellow of the Canadian Institute of Planners, in fact. So I’m speaking out — I’ve worked with all those chief planners, and they didn’t do a very good job, with the greatest of respect.

The Globe’s Oliver Moore: Are you applying for a job as chief planner?

van Nostrand: Are you offering it?

Moore: Do you want to be chief planner of this city?

The Sun’s Don Peat: Just so we’re clear, does your firm have any horse in this Gardiner debate?

van Nostrand: Absolutely not. I’m here as a citizen of Toronto.

Rider: So you’re not on retainer to the CAA or the coalition or anybody else?

van Nostrand: I have no — I’m here independently, I have nothing to do with these people. I was asked because, because this position is so understated out there, I’m just here to state it. And by the way, I get lots of emails from lots of planners in the city who say thank you for putting this on the table.

Moore: You’ve been quite vocal this week. Are your efforts this week, are they being coordinated or in conjunction with StrategyCorp?

van Nostrand: By me, by my daughter, and I, yes. With who?

Rider: So when you phoned the mayor and you were on the mayor’s radio show, who coordinated that?

van Nostrand: I got a call from the mayor’s, from CF— the radio station—

Tory’s spokesperson Amanda Galbraith (from the back of the room): Guys, I can speak to that.

van Nostrand: No, I got a call from the radio station saying — I didn’t even know I was going to be interviewed by the mayor.

Rider: You just started to say you had a call from the mayor’s office.

van Nostrand: No, I said from the radio station.

Moore: Because this all seems very coordinated. You know, um, you sent me an email on Monday and you cc’d someone at StrategyCorp, saying I might be interested in talking to you. I’d never spoken to you, I didn’t reach out to you — I’d be happy to chat with you — but it was out of the blue, and John Tory’s ex-spokesperson, who works at StrategyCorp, was cc’d on the email.

van Nostrand: I don’t see it as being coordinated at all. It’s coherent because I’ve been thinking about this for 15 years.

Rider: And I got an email from the same person working for StrategyCorp, who also used to work with the mayor, urging me to speak to you.

van Nostrand: I’m talking about what the actual proposal is before the City of Toronto. That’s my position today, and that’s what I’m talking to.

This morning (Monday), van Nostrand was among the signatories to a rebuild-the-Gardiner open letter circulated to media by Courtney Glen from her Gmail account.

Do you think council should choose the Hybrid or Boulevard option?

Correction (6/9/15, 2:50 pm): The second sentence of this post originally referred to the Gardiner “east of the DVP.” It should, of course, have said “east of Jarvis.”