Does cleaning with vinegar actually disinfect? 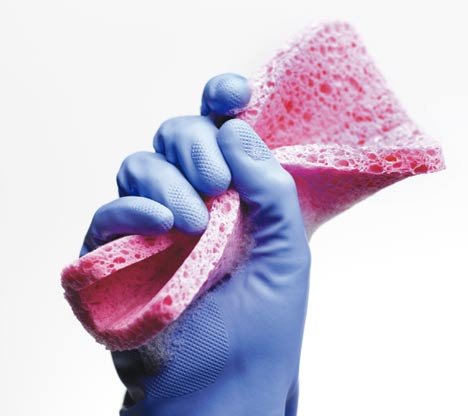 A little of the acetic acid in vinegar goes a long way, especially if you heat it or sprinkle it with salt.

A: So you’ve given up the Comet and are huffing away at your tub and counters with vinegar. High fives! But the question on many minds is, does it actually kill stuff?

It’s true that most green cleaners on the market talk up their general earth-friendliness (biodegradability, plant-based ingredients, that kind of thing) but rarely mention whether they annihilate germs. Why? Well, in all honesty, they don’t, and we don’t need as much bug-banishing as the makers of mainstream cleaners would like us to believe.

I blame the nightly news for pulling out those UV lights that reveal, – gasp! – the hidden world of bacteria crawling on everything from your sink to your cellphone. Beware: the bottom of your purse is loaded with bacteria, too, warned a recent episode of television’s The Doctors. But, really, who gives a bleep? We certainly should not.

You may have heard how hypersanitized homes are making our kids sick, and that childhood exposure to certain bugs and viruses may bolster our immune systems and reduce our chances of developing asthma, eczema or allergies.

Now new research fresh from Harvard’s Brigham and Women’s Hospital has offered up proof of the 20-year-old hygiene hypothesis. Turns out germ-free mice had way more lung and colon inflammation than mice raised in a normal microbe-rich environment.

And by the way, even if you don’t use air-polluting, lung-irritating bleach, most household disinfectants rely on quats (quaternary ammonium compounds), which seriously increase the presence of antibiotic-resistant household germs.

Now, you may be saying, “I know chemicals are bad. That’s why I’m using vinegar. I just want to know if it does something.”

I’m happy to report that, yes, conscious cleaners, vinegar is doing more than just making your kitchen smell like a delicious plate of french fries (or a fragrant bowl of salad – pick your poison).

One Japanese study looking at the antibacterial action of vinegar on food-borne pathogenic bacteria including E. coli and salmonella found that a little of the acetic acid in vinegar goes a long way. Add a sprinkle of salt to the mix and growth of all strains was even further subdued. Even cooler, or hotter in this case, is that heating up vinegar boosts its bacteria-busting power.

Keep in mind that this and other comparable studies were basically done on pickled veggies. Soaking vegetables in vinegar will prevent food-borne poisoning, but I can’t tell you that quickly wiping your counter with vinegar will remove bacteria as effectively as headache-triggering bleach.

Nevertheless, studies have found that vinegar does reduce surface bacteria (including on produce as a veggie wash) and, really, for most home cleaning situations, that’s good enough.

Try adding some salt to the mix in tubs and sinks to boost its scouring potential. Heating up your vinegar before you spray it on shower doors and bathtubs also seriously ups its gunk-melting power (in my totally unofficial studies), especially if you let that hot vinegar sink in for a few minutes before you scrub.

If you’re looking to stamp out 99.99 per cent of all bacteria on your toilet handle, cutting board or door handles – say, mid-flu-outbreak (flu viruses can live on hard surfaces for up to 8 hours, according the Centers for Disease Control), you could look into the power of thyme oil.

I’ve talked it up before here, and if you haven’t already scored yourself a bottle of Ontario-made Benefect, it’s time. Okay, sure, your pad will smell pretty strongly of thyme concentrate for about 10 minutes, but it fades soon enough, and I’d rather take in a lungful of thyme oil than a deep breath of Javex or Mr. Clean.

FYI, the David Suzuki Foundation has just launched a new national study asking Canadians to take a closer look at the cleaning products they use. They’re going to use the results to push for better labelling laws, since, outrageously in 2012, cleaners still aren’t obliged to list their ingredients.

Take the survey at davidsuzuki.org/whatsinside and tell your MP you want mandatory ingredient listing on cleaning products in this country. It’s your consumer right to know what you’re buying.

In the meantime, sticking to vinegar and a little elbow grease is one of the best ways to guarantee you’re not poisoning your household one spritz at a time.