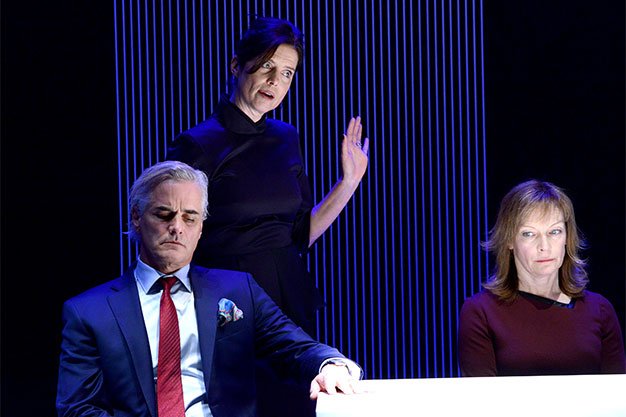 A politician gets caught in a sex scandal and so announces his resignation, while his wife dutifully stands by him at the press conference. By now this scenario has become a news cliche. But if youve ever wondered what happens after the media moves on to its next story, check out Domesticated, Bruce Norriss savagely funny look at sex, power and public shaming.

Norris won a deserved Pulitzer Prize and best-play Tony Award for Cly-bourne Park, his clever script about race, class and real estate. By comparison, Domesticated is a little messier, but its no less timely, and this Company Theatre and Canadian Stage production is energized by the brilliant casting of real-life couple Paul Gross and Martha Burns in the leads.

Burnss Judy dominates the first half as she struggles to discover what her husband, Bill (Gross), did and how she feels about it. Currently, a 23-year-old prostitute is in a coma because of him. Was it an accident? And how many times has he cheated on her anyway? Judys reactions to her husbands scuzziness intensify with each revelation.

Bill, meanwhile, remains silent as everyone speaks for him: Judy his lawyer (and the couples friend), Bobbie (Torri Higginson) his mother, Ed (Nicola Lipman) and an Oprah Winfrey-like TV talk show host (played as a note-perfect parody by Akosua Amo-Adem). Even Bills adopted Cambodian daughter, Cassidy (Abigail Pew), gives a science talk that obliquely comments on his situation.

Its in the second half that Bill finds his own voice, and Gross rips into his role, especially in one scene set at a bar where his honeyed stories and the positioning of his whisky glass tell you something about his sinister motives. I wish Gross did more theatre acting. Hes electric onstage, especially in a climactic rant about how this particular privileged white male has been put-upon.

Not everything works in Norriss script. Bills political office is never made clear, and the second act quickly becomes a variation on the Biblical Book of Job, with some predictable buttons pushed. The part of the couples older daughter, Casey (Kelly McNamee), is also repetitive.

But working on Nick Blaiss simple yet suggestive set, director Philip Riccio makes the scenes move swiftly while giving the audience time to piece together the secrets and lies in this royally dysfunctional family.

The fine cast also includes Maria Vacratsis, Salvatore Antonio, Sarah Dodd and Vanessa Smythe, but its Gross and Burns youll be praising as you leave the theatre.