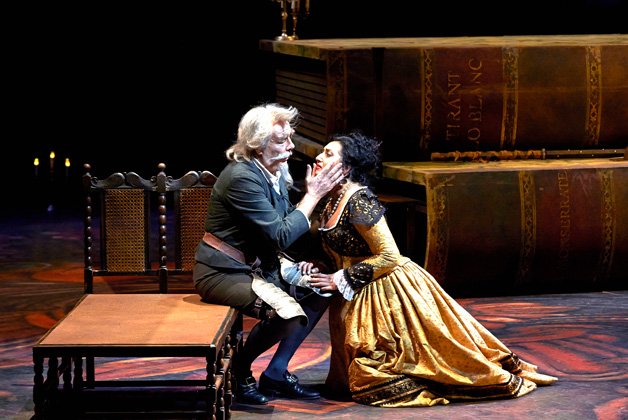 Don Quixote, Cervantes’s archetypal tale of an aging, unhinged wannabe knight and his down-to-earth “squire” is an enduring classic that lives on in the novel and even the musical Man Of La Mancha. Less well known is Don Quichotte, the 1910 opera by Jules Massenet, and in light of the Canadian Opera Company’s first production of it, that’s understandable.

Neither musically nor dramatically outstanding, the opera is a star vehicle for a bass, especially one in the twilight of his career. Veteran singing actor Ferruccio Furlanetto understands the comic and poignant aspects of the story as Quichotte and Sancho Panza (Quinn Kelsey) embark on a quest to retrieve a necklace stolen by bandits from Quichotte’s beloved, Dulcinee (Anita Rachvelishvili).

Director Linda Brovsky has taken the idea of Quichotte’s obsession with books and the imagination literally. Designer Donald Eastman uses gigantic tomes and an oversized ink pot and quill throughout the opera. Their purpose seems muddled, however do they signify that Quichotte is making up his adventures? That he’s reading about them? And these symbols clash with the naturalism of flamenco dancers stamping their feet and a real horse and mule trotting onto the stage.

Despite all this, and the episodic nature of the story itself, the power of Quichotte’s quest comes through in Massenet’s lyrical score, which offers up a couple of lovely melodies amidst some schmaltz and an unsuccessful attempt to integrate Spanish flavour into the mix.

Rachvelishvili’s mezzo is rich and ample – at times overpowering – and she’s got a strong stage presence. Kelsey’s comic sidekick is a joy to watch, and his voice is firm and full.

Furlanetto’s resonant voice reaches great depths of emotion, especially in the final scene. And he’s completely at ease onstage, even twirling his character’s pouf of white hair in moments of bravado.