It wasn't a question about the recent Huffington Post rape story that pissed off Lita Ford, formerly of the Runaways – though that didn't help 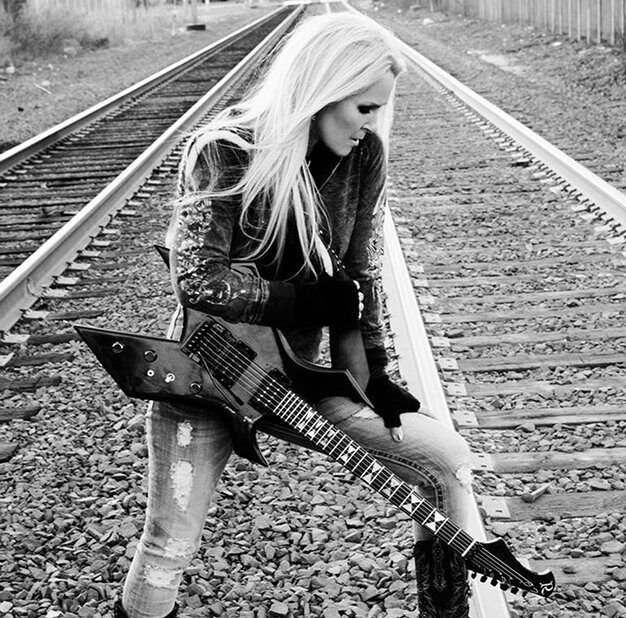 You know how sometimes you go into a music equipment store and buy a cheesy but awesome guitar pedal, and the guy behind the counter smirks at you and says, “No one ever even looks at those pedals, let alone buys them” and you go, “I know, I know. You don’t have to tell me. Just ring it through, please”?

That’s also the reaction I get to a lot of the music I love, including stuff by Lita Ford. I first learned of her not through her tenure in trailblazer 70s all-girl band the Runaways, but through her big-haired glam metal solo career in the 80s and 90s, in which she duetted with Ozzy Osbourne and crawled on the floor in spandex and kneepads for her Kiss Me Deadly video.

She was the first woman I ever saw play heavy metal guitar. Her low voice was tough and cool, her riffs and solos badass. She was entrenched in the Sunset Strip scene I longed to be a part of. (Fat chance – I was just 14 and living in Halifax). Two decades later, when The Runaways movie came out in 2010, I trumpeted to anyone and everyone how she’d gotten the shaft in it.

It bugged me that she didn’t get near the respect co-Runaway Joan Jett earned from her punkier solo career, or Runaways singer Cherie Currie, whose solo career was a bust. (That Lita/Ozzy duet, Close My Eyes Forever, went to #8 on the Billboard Hot 100, thank you very much.) No one ever seemed to ask Ford to be a talking head in rock history documentaries, but gum-smacking Joan, black hair spiky and a choker around her neck, was in all of them.

Ford seemed to be one of the least liked Runaways, something I blamed on the general populace’s bias against heavy metal, a genre regularly derided or just flat-out dismissed by critics, especially when the kind you make is more like pop-metal/glam metal/hair metal. (And then it’s derided by metalheads, too, for Chrissakes.)

I bring some of this up with the American metal queen herself (Lee Aaron holds the Canadian title) over the telephone, ahead of her headlining show at the Phoenix on August 9. “In your 40-year career, how have you dealt with the lack of respect the genre often gets?” I ask. “Have you, say, ever felt pressure to change your sound?”

“What?” Ford asks sharply, the cellphone connection made echoey by her Bluetooth. (She’s driving through L.A. en route to a meeting.)

“You think I don’t get respect for my musical style?” she asks after the longest, most uncomfortable pause. “You don’t think being a female has anything to do with it? If my name was John Smith, maybe it’d be different. If I was in a guy band…. Well, I was in a guy band. I am in a guy band. I also just won a guitar legends award – the fourth person to ever win it. Me, Jeff Beck, Joe Perry and Les Paul.

“How is that underrated? I was the fourth person to get this award,” she reiterates. “Les Paul, Joe Perry, Jeff Beck and Lita Ford. Legendary guitar-playing award.”

I try to explain that I meant the genre in general, not her music specifically.

“What would I play instead?” she huffs. “Beyoncé? I mean, not everybody loves that kind of music.”

Eager to get things back on track, I ask what she’s been listening to these days.

“Not much. I listen to myself. Songs I’m writing at the moment. Riffs. Stuff we’ve recorded. [She’s in the studio working on a follow-up to 2012’s Living Like A Runaway. It’s due out next March.] I don’t really like too much. I don’t like the newer stuff. If I were to listen to anything, it’d maybe be older music.”

She returns to the underrated thing, a word I never used.

“How old are you? I feel like you don’t seem to know too much about me. I was nominated for Grammys. Best female rock vocal performance. I’ve had top 10 singles. So I’m not that underrated.”

I’d forgotten about rock stars’ fragile egos. I’d forgotten that many live in a bubble – or on islands in the Turks and Caicos, as Ford did for many years with her ex-husband, Jim Gillette, vocalist for Nitro, and their two children.

In my excitement about talking to one of my guitar heroes, I’d assumed Ford somehow inherently knew that I was on her side. Not the enemy. In fact, one of the few music journalists who still keep tabs on her and are still happy to push her career, even though it slowed to a crawl during the grunge explosion and then became non-existent for 14 years, until 2009’s Wicked Wonderland.

But let’s back up.

To be fair, Ford has said some cool things to me earlier during this interview.

About being 11 years old and sitting in front of her parents’ living room stereo, picking out riffs by ear from her favourite albums. (She’s cited Deep Purple’s Ritchie Blackmore as a major influence.) “Nobody told me that girls don’t play guitar. No one was knocking on my door saying, ‘Girls don’t do that. How come you can do that?’ Cuz I was just a kid. Neighbours would come over and watch me play. I had my own little audience.”

She even offered up without prompting the story of how she joined the Runaways, in response to my question about whether she’d planned on starting a music career before band manager Kim Fowley plucked her out of obscurity to be a Runaways guitarist. He’d found her after she’d filled in on bass for another band.

“It’s amazing how quickly word gets out and they get your phone number,” she recalled. “It’s just bizarre. He called and said, ‘So I hear you’re a bass player.’ I said, ‘No, I’m a guitar player.’ He said, ‘Well, we need one of them, too.’ I asked my mom. I said, ‘He’s kind of weird, Mom. What do you think?’ She said, ‘Go see, go see, get in your car and go see.’ I’d never been to Hollywood before. I didn’t even know where it was. I drove about an hour, found him, auditioned for the Runaways and got the gig right away.”

Of course I wanted to hear about this time in her life, but I was being careful about it. Less than a week before our interview, on July 9 the Huffington Post published an in-depth investigative story by Jason Cherkis about former Runaway bassist Jackie Fuchs’s allegations that Fowley had raped her on New Year’s Eve 1975 when she was 16, at a party attended by the other teen Runaways aside from Ford. Fuchs had been drugged. They’d allegedly watched it happen and did nothing.

But Ford’s candidness had gotten us there quicker than I’d expected. So I kept going.

What did she remember about those years, I ventured.

“All the girls didn’t have to be the best musicians. I think so long as a couple of us could play, get the band vibe, we’d get by. I was a good musician, and Sandy [West, drummer] was a true musician. The rest of the girls were just average. Joan could sing, Cherie could sing, so that helped. We were able to get a record deal. Cuz of the novelty.”

It was so easy, I commented, to forget that the Runaways spanned such a short time in their lives. The band only lasted from 1975 to 1979.

What’s her main takeaway from those years? What does she mostly feel when she reflects on that time?

“It was an experience. You gotta grow up and learn something somewhere, somehow. And to be that young and get to do what we did, tour the world in front of thousands of screaming kids, and guys – it was a blast. There were bad things that happened, of course. But…. you gotta read my book. It’s different than the other books [about us.] It’s not like the Cherie Currie book [Neon Angel].”

“I didn’t. I just don’t want to be involved. It was so long ago. I think the only reason [Fuchs] is able to talk about it now is because Kim is dead. I’ve heard that from people, that once the perpetrator is in a place where he can’t come back and hurt you, like in jail or dead, that the victim speaks out. I guess that’s why she waited so long.”

And Ford wasn’t there that night, at the NYE party?

“I was not there. And honestly I don’t know anything about it. Honestly I don’t. I didn’t hang out with Cherie and Joan. The only time I really saw them was when I was onstage. We were not close friends. It was like being in a classroom. You were put there and didn’t choose the students you wanted to be with.

“With Kim Fowley, it was kind of the same way. We didn’t choose each other. He chose us to be together. And some of us didn’t really get along or relate to each other. Joan and Cherie stayed very much to themselves. Whatever they did they did together.”

In one of the article’s most disturbing sections, Fuchs’s successor on bass, Victory Tischler-Blue, claimed the rape became a running joke in the band after Fuchs quit. Did Ford remember that?

“Hell, no. That’s ridiculous. A running joke? No, I don’t remember anything like that. I roomed with Jackie a lot. None of the other girls wanted to room with her because they wanted to be together. I never heard anything about it. Was it a running joke? If it was, it wasn’t something I was involved with. It might’ve been between Joan and Cherie, but it wasn’t between me.

“Before he died, Kim Fowley told me he was afraid of me. [Scared] that I would’ve hit him with a Marshall stack or something. I had a temper. I pushed over Marshalls, you know.”

I can believe this.

Her agitation is clear. She mentions that her manager told her not to talk about this stuff. I change the subject. Back to the music, the point of all of this, after all. That’s when I ask the genre question, supremely ill-timed. I hear about her guitar legend award. About her Grammy nod. About how everything is in her book. She questions my knowledge, age, support. “I have a feeling you just want to hear about the Runaways,” she says.

“Have you heard the Living Like A Runaway album?” she asks.

Jeez. Of course I have. Just that morning I’d teared up over the song Mother, about her losing custody of her children after her nasty 2011 divorce, about parental alienation. But that’s another story for another time. A whole other minefield to detonate.

“It’s a good album,” Ford says, more upbeat, her resilience peeking through. “We’ll be playing some of that. And some old Lita songs. We take you back to the Runaways days. Just basically run through a little bit of everything. It’s a rocking set. Really smoking.”

I thank her and she thanks me and we say our goodbyes and I put down the receiver with shaking hands.