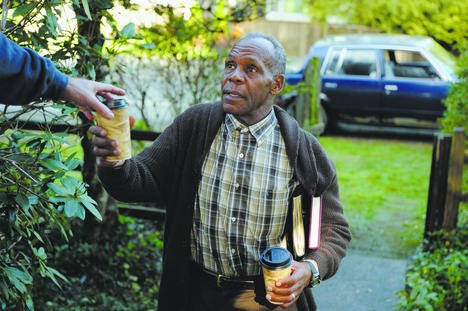 Donovan’s Echo is perched somewhere between a Twilight Zone episode and a late-period M. Night Shyamalan twister, a moody psychological thriller that buries a couple of worthy ideas beneath a series of contrivances. It’s hobbled further by a haphazardly written screenplay and bargain-basement production values.

Set in 1994, the action follows the ordeal of Donovan Matheson (Danny Glover), a mildly dyslexic mathematician – he worked on the Manhattan Project! – who’s returned home to his small British Columbia town after decades of unexplained absence.

Almost immediately, Donovan starts having the same premonitions he experienced 30 years earlier – right around the time his wife and daughter died in a car accident. Is history repeating itself? And what does all this have to do with his work on cold fusion?

Glover plays his character’s confusion well, and Bruce Greenwood nicely underplays the role of a sympathetic friend, but director Jim Cliffe, who wrote the script with Melodie Krieger, mistakes clutter for clarity, throwing plot elements around with the expectation that the big twist ending will make sense of everything.

Sadly, this does not happen, mainly because the final revelation is both unnecessarily convoluted and utterly preposterous, involving a turn that even Shyamalan might have balked at deploying. If you can’t stick the landing, you shouldn’t even bother.