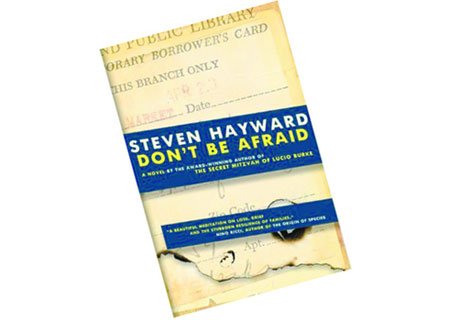 I’m tempted to conceal what Don’t Be Afraid is about. That’s because stories about grief are seen as something of a buzz-kill. Knowing that, Nicole Kidman, while walking the Golden Globes red carpet, urged people not to avoid her film Rabbit Hole, about parents recovering from the death of their child, because, she said, it’s beautiful and inspiring.

The same can be said of Steven Hayward’s new novel about the death of 18-year-old Mike Morrison, killed in a gas explosion at the local library where his mother compelled him to work.

Told from the point of view of Mike’s one-year-younger brother, James, who frequently refers to his nominal connection to the Doors frontman, the story digs deep into the souls of all the members of the grief-stricken family.

The science-minded dad, a frequent expert witness in lawsuits against corporations pushing defective products, becomes obsessed with figuring out exactly who to blame for the accident. James’s guilt-ridden mother, an ex-nun, withdraws completely, leaving school-dropout James to care for his four-year-old brother, and sister Vivian to microwave some pretty scary dinners.

And the characters are very endearing, especially James, the fat boy who thinks he can find solace at the bottom of a box of donuts and whose love for his dead rebel brother is so passionate.

Hayward has definitely raised his game. His first novel, The Secret Mitzvah Of Lucio Burke, set in Toronto during the Christie Pits anti-Semitic riots, is very entertaining, but this follow-up goes to much riskier places.

Heed the title and Don’t Be Afraid.