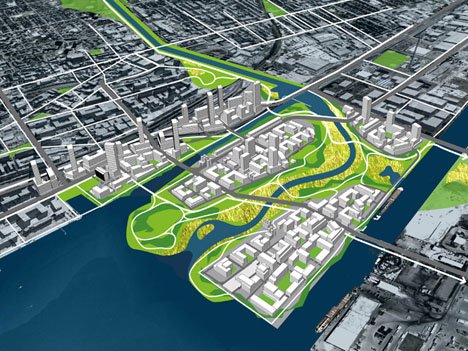 After years of planning, how should Toronto kick start its Port Lands revitalization?

Hundreds of people turned out to a public consultation on that subject Monday night. The prevailing sentiment, however, was that it doesn’t need to be sped up.

The fear expressed by many is that rushing through the development risks bungling long-term goals of making Toronto’s waterfront ecologically sustainable, publically accessible, and pleasing to the eye.

The consultation at the Toronto Reference Library was a joint effort by the City of Toronto and Waterfront Toronto, the arms-length agency in charge of harbour development, and was the first since council voted to accelerate planning for the massive Port Lands project.

The capacity crowd that answered the call for feedback had plenty of suggestions, but few of them focused on fast-tracking development that will reshape nearly 1,000 acres of industrial land on the city’s eastern waterfront. Instead, when the nearly 700 people in attendance broke into working groups they came back with recommendations to conserve and expand recreational areas, or make sure the design work lives up to the highest ecological standards in the world.

One group demanded to know why the project is being sped up at all. Another summed up the popular suspicion that Mayor Rob Ford’s administration is seeking to make a quick buck by selling off Port Lands to developers. “Don’t accelerate this project for short term-gain,” they advised.

Waterfront Toronto president John Campbell played down participants’ fears, despite the strong sense of skepticism in the room.

“The guiding principles of design excellence and sustainability, they survive. They’re not being attacked,” he said. “We’re not throwing the baby out with the bathwater.”

The city’s planning and growth management chair Councillor Peter Milczyn attended the consultation, and said the cynicism was understandable given how the Port Lands review came about. Back in September Councillor Doug Ford, the mayor’s brother, unexpectedly announced plans to wrest control of the project from Waterfront Toronto and hand it to the Toronto Port Lands Company. To much derision, Doug backed building a giant Ferris wheel and megamall on the site, but the Fords eventually backed down and council voted to review existing plans with the goal of accelerating them.

“I understand why people are skeptical because I understand the fear and even the anger that was generated when Councillor Ford and the Port Lands Company unveiled their ideas,” said Milczyn, an ally of the mayor who put forth the motion to accelerate the project. He maintains the review is necessary to find ways to finance existing plans and to harmonize projects across the vast Port Lands area, much of which still lacks blueprints for development.

“This is not a Trojan horse exercise,” assured Milczyn.

Deputy city manager John Livey told participants that any new strategy that comes out of the review will stay true to existing plans to re-naturalize the mouth of the Don River, a design element that doubles as a flood protection zone and is seen as a cornerstone of the Port Lands project by those who want a strong green component. Livey admitted there could be “tweaking” to details of the re-naturalization however.

While there are still two rounds of public consultations and several stakeholder meetings to go before June, when a staff report on the accelerated plans is presented to city council, Campbell speculated that speeding up development could mean building less housing on the waterfront. Instead, Waterfront Toronto is eyeing big anchor projects that it could use to generate cash for the Don re-naturalization and more modest mixed-use residential construction.

“Are there things we could put there that would spur development? Like a university, and entertainment area, or a research cluster,” Campbell said in an interview. “Are there ways we can bring the private sector in to finance this?”

Where to find multi-billion dollar financing remains the huge question mark of the Port Lands review. The Don re-naturalization alone is pegged at $634 million, and large injections of government funds to pay for it are unlikely in the current economic climate. Aside from the one-shot anchor projects Campbell is considering, he also floated the novel idea of changing Waterfront Toronto’s mandate to allow it to raise money by issuing bonds to private investors.

Other cities like Oslo have financed their waterfront developments by instituting road tolls on downtown streets, a political non-starter in Rob Ford’s Toronto.

Milczyn speculates that if the review process results in a sound business plan, work on new Port Lands projects could break ground within five to ten years. Critics say that timeline is much too ambitious.