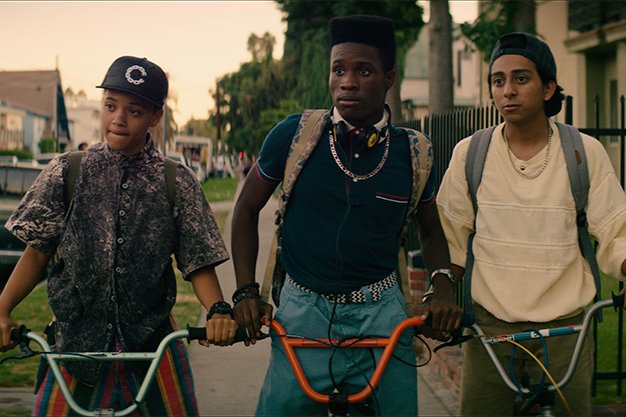 With its chaotic plot about an awkward high school kid (Shameik Moore) who ends up in possession of a knapsack full of illegal street drugs, putting himself and his best friends (Tony Revolori, Kiersey Clemons) in harm’s way, Dope feels like at least four different movies crammed into one.

It’s a high school picture, a coming-of-age drama, a drug comedy and a nostalgic celebration of/cynical push-back against the Friday series. It is so many things, in fact, that it’s exhausting trying to figure out which movie it’s supposed to be at any given time.

The storytelling in writer/director Rick Famuyiwa’s movies – The Wood, Brown Sugar, Our Family Wedding – has always been a little casual, but Dope is all over the place. Every well-crafted scene is followed by something that sends the movie spinning in a new direction. Key characters appear and disappear plot threads are dangled and dropped.

I mean, sure, one movie can incorporate conversations about 90s hip-hop and the Bitcoin economic model. But maybe it shouldn’t. Good soundtrack, though.