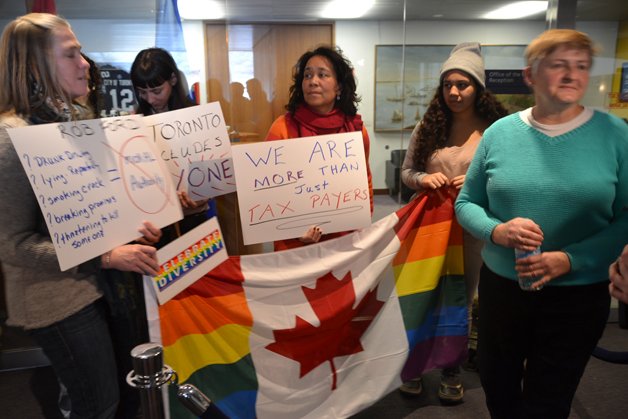 A group of a half dozen women and middle school kids spent the morning at City Hall, holding signs proclaiming “We are more than just taxpayers” and “Respect Diversity.” They said they were there to send the message that Ford’s bad behaviour is setting a poor example for the young people of the city.

The mayor was not at his office but his brother, Councillor Doug Ford, popped by late in the morning and was confronted by the group.

“The children feel he’s a bad role model,” one protester said of the mayor.

“I know, I know, but there are thousands that love him,” Doug responded.

Councillor Ford then scrummed with the media while protesters periodically interjected. He said it was the group’s “democratic right” to be there and that he respected their demonstration.

“I’m glad that they brought their children down even though they should be in school,” he quipped.

Doug told the media he didn’t know where his brother was Tuesday morning. When a reporter asked why the mayor still refuses to make his schedule public, the councillor told her, “I don’t think you have the moral authority to ask what the mayor’s doing.”

After he left, protester Jay MacGillivray said he had been “disrespectful” by refusing to speak directly to the children. She rejected the Fords’ plea – recently made on their new Youtube channel – to judge the mayor on his fiscal record instead of his well-documented substance abuse issues.

“The city isn’t run with a calculator, it’s run with moral authority,” she said. “And [the mayor has] none”.

MacGillivray, a midwife who runs an HIV-prevention program at St. Michael’s Hospital, told reporters she decided to organize the protest after her 12-year-old daughter asked her why the mayor hated the gay community. Mayor Ford tried unsuccessfully to have a gay pride flag taken down from outside City Hall last week.

The mayor arrived at his office around 12:30 p.m., but by that time the protesters had already left. His spokesperson said he had spent the morning touring a Toronto Community Housing building in the Victoria Park and St. Clair neighbourhood.