Doug Ford stays in the picture 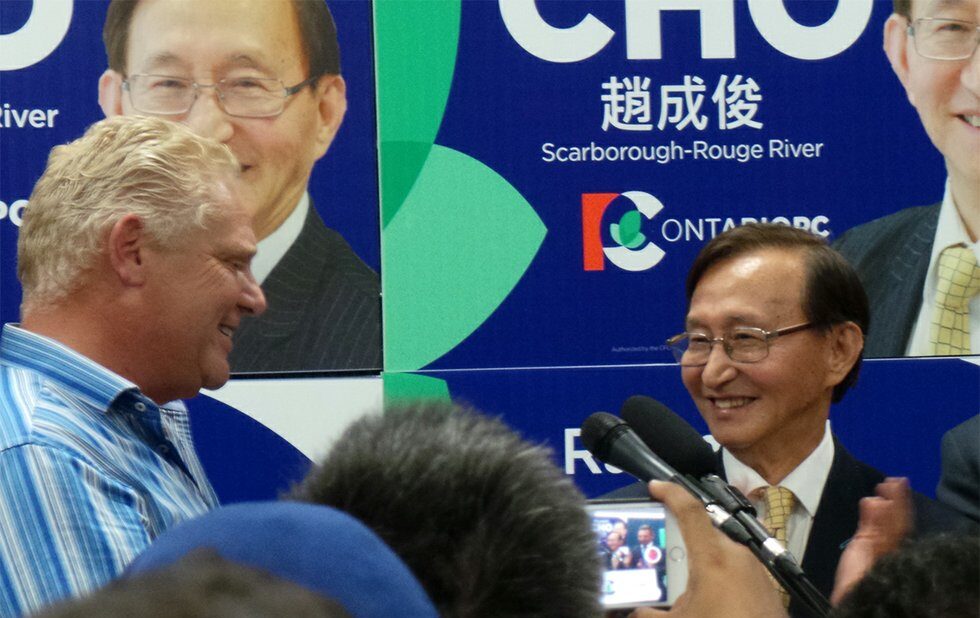 When the Progressive Conservatives’ Raymond Cho was declared the victor of the September 1st by-election in Scarborough–Rouge River, the plan for the speeches seemed simple enough.

“I understand that as of tonight, the riding will be now called ‘Scarborough–Blue River,'” he told supporters and media gathered in the sweaty campaign office near Sheppard and Brimley. He thanked by name several people who’d worked on the campaign, including Doug Ford, officially its co-manager.

“Your hard work and commitment to your community is second to none,” Nagalingam said, as Ford beamed from the side.

He then introduced PC leader Patrick Brown, who went through a similar list of thanks and framed the victory as an symbol of momentum ahead of the 2018 general election.

“And now, ladies and gentlemen, the moment I’ve been looking forward to for the last month,” Brown said, reaching his climax. “It is my great honour, my great pleasure, to introduce to you the newest Progressive Conservative member of provincial parliament, Raymond Cho!”

Cho — a longtime member of Council so self-effacing that he was almost exclusively known for his talent for connecting any debate, any issue, to a discussion of his native South Korea — took the mic from Brown. And then he immediately ceded it.

“Thank you very, very much,” Cho said. “Before I deliver my little thank-you speech, I’ll be very happy if my good friend, my family friend, Doug Ford says a few words. Without his help, I don’t think I could win this election, so I’d like to give this opportunity to Doug.”

That’s not how things like this are supposed to go. You start with the warm-up guy, move on to the leader, and the leader brings up the candidate. You don’t double back to the campaign manager/mascot.

“The party’s over, Kathleen,” Doug said, fantasizing about having the premier’s attention. “We’re movin’ on. Now we’re gonna have more members in Toronto. We’re gonna bring transparency and accountability at Queen’s Park, with our leader Patrick Brown and my good friend Raymond Cho.

“People in Scarborough are gonna be heard on subways!”

Cho eventually got around to speaking upon being reintroduced by Ford, delivering a seven-and-half-minute ramble about the Liberals in which he did not mention Korea.

But between the burgers in the parking lot and the photos with the fans, it was clear whose flavour of event it was. If the PCs’ victory was supposed to taste like chemical-blue freezie, it instead reeked of ketchup and mustard.

Much like Donald Trump, whom he greatly admires, Ford views politics as ego-boosting adventurism, with a deeply unnatural populist appeal serving as both the means and bare justification for his own ambitions. But also like Trump, it’s not clear what the end goal is, since he emphatically disdains the actual work of governing. He’s found a way to bask in the fun parts of politics — the bruising, the winning, the adulation — without shouldering the responsibilities of victory.

He may no longer be the co-pilot in a mayor’s office controlled by his brother, but Ford still sets the terms of debate at City Hall just by hovering over John Tory as a spectre. He’s planning a family Fest for this Friday. He is more visible than his nephew, Michael Ford, the latest councillor for Ward 2 and only member of the clan to currently hold elected office.

The PCs, meanwhile, have found a way to take advantage of whatever pull Doug has without yet shouldering the responsibility of fielding him as a candidate. In an emergency, they can push the eject button while limiting the damage to their electoral hopes.

But the arrangement isn’t entirely without baggage.

Following the speeches, the room was cleared for a media availability with Brown and Cho. Reporters posed more questions to Brown about a potential Doug Ford candidacy than Cho was asked on any subject.

Brown: “Um, I don’t think Doug has made that, uh, decision. I think he’s looking at a number of options. You know, I’ve asked for open, fair nominations around the province, and…” [Brown continues on the subject of open nominations, then answers a question no one asked about the magnitude of the win in Scarborough–Rouge River.]

The Globe’s Adrian Morrow: “Your predecessor desperately didn’t want Doug Ford to run for the provincial Tories and did everything possible to sort of discourage him from doing so. How do you feel, do you think Doug would make a good candidate, or are you gonna dispatch your chief of staff to try to discourage him from running?”

Brown: “Just like I said, in terms of [an earlier question on Niagara West–Glanbrook], we’re gonna have fair, open nominations. And you know, Doug is considering a number of options: I know he has got business interests, he’s got remaining municipal interests, and he has some provincial interests. So I’ll let Doug speak to that, but I’m gonna…” [He returns to the subject of open nominations and just how gosh-darn excited he is about all the candidates coming forward.]

Morrow, trying again: “Do you think Doug would be a good candidate?”

Brown: “Well, um, I think Doug, Doug would be a good candidate.” [His voice goes up at the end, as though he is asking a question.]

By this point, Ford was already out in the parking lot, meeting his fans.