DoFo proves he and his brother really are Tweedledumb and Tweedledumber 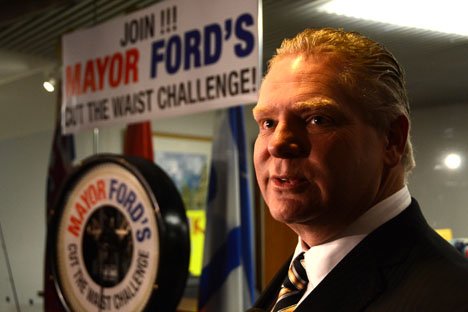 The irony is thick with this one. Just weeks after his brother supposedly landed in rehab – coincidentally during Mental Health Week – Councillor Doug Ford insulted anyone with autism and/or a mental health issue.

In case you haven’t heard, Councillor Ford made obtuse comments last week about the Griffin Centre, which according to its website is a mental health agency for youth, adults and their families. It recently opened a residence in his ward on Jeffcoat Drive for children and young adults with developmental disabilities, including autism.

After receiving complaints from residents about police, fire and EMS vehicles blocking the street since the house opened, Doug told the Etobicoke Guardian: “My heart goes out to these kids with autism. But no one told me they’d be leaving the house. If it comes down to it, I’ll buy the house myself and sell it.”

This is wrong on so many levels, it’s difficult to know where to start. There’s the fact that we’re talking about three young people between the ages of 12 and 21 with unspecified developmental disabilities who moved into the house in mid-March.

For people on the autism spectrum, routine is key to lower their stress levels. The same can be said for people with developmental disabilities. Change can be a struggle.

The fact that there has been police involvement during this transition period is not surprising. Some people on the autism spectrum self-harm, and some developmentally disabled people cannot control their behaviour.

The worst possible strategy when dealing with an autistic person or someone with developmental issues is to make them feel alienated and stigmatized because you don’t understand their disorder.

It’s heartbreaking enough for parents to decide they can no longer care for their child, but then to have a city politician say he will buy the group home your child lives in and sell it so he and some of his constituents can continue to be ignorant is enraging.

Aside from this being an example of the most deplorable NIMBYism, it’s sad.

By Doug’s logic, I could say that my heart goes out to the Fords, but no one told me I’d be living in a city with a crack-smoking, racist, misogynist, homophobic mayor and his enabling city councillor brother. But here we are.

Somehow the irony was lost on Ford when he called the Griffin house “an absolute nightmare” while defending himself on CP24 on Sunday, May 18.

If Ford were truly concerned about someone “ruining the community” or leaving the house, it should have been his brother, Mayor Rob Ford, before he became an international embarrassment.

To help raise funds for the Griffin Centre, attend the Music For Autism series at St. Stephen-in-the-Fields Church on June 12 at 7:30 pm. For more information about autism, visit AutismSocietyCanada.ca.