Councillor says he wants to focus on getting his brother re-elected mayor, denies that scandals damaged his relationship with Ontario PC party 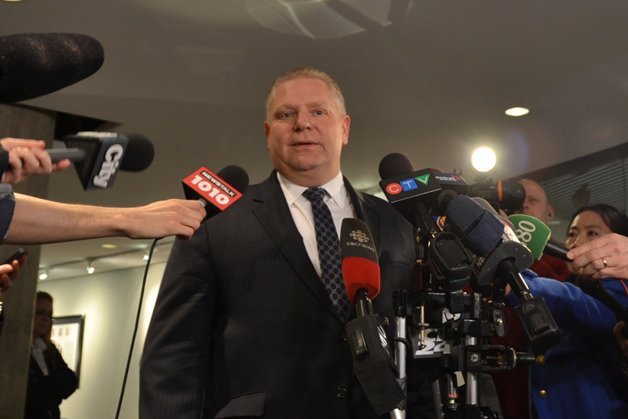 Doug Ford will not be in government following the next election cycle.

For months, Councillor Ford has publicly mused about seeking the nomination for the Ontario PC party in Etobicoke North. But at a press conference at City Hall on Thursday he announced he will not run in a provincial race that could come as early as this spring, nor will he fight for his councillor’s seat in the October municipal vote.

Instead, he said he plans to focus on serving as campaign manager for his brother, Mayor Rob Ford, as he vies for re-election.

“I feel I’m obligated to the PC Party, the leader Tim Hudak, to give you my intentions on running for provincial election,” he told the media, as the mayor stood by his side. “I’m declaring that I will not be running the provincial election. I’d love to, but you have to put other things ahead of your own political aspirations sometimes.”

He stated that he intends to run provincially one day but ” the timing right now just doesn’t work” because of the mayoral election this fall.

“You can’t wear two hats, you can’t put your butt on two sides of the fence,” he explained.

Councillor Ford won the 2010 municipal election in Etobicoke North in a landslide, with 71.7 per cent of the vote. At one time he was considered a potential star candidate for the Tories in the Liberal-held provincial riding, but that was before he was tainted by the drugs and gang scandal that enveloped his brother last year.

A Globe and Mail investigation last May also reported that Doug was a significant player in Etobicoke’s hash-dealing trade during the 1980s. The councillor denies the allegations.

Since the controversy hit the mayor’s office Hudak has refused to say if he would endorse Doug’s candidacy despite repeated prodding from the media, and at times he has seemed exasperated at having to field questions about Toronto’s most troubled political family. Those questions are likely to dissipate now that Doug won’t be a candidate.

While both the councillor and the mayor expressed support for Hudak on Thursday, they made clear that they will not so much as canvass on behalf of Progressive Conservative candidates this year.

“Rob and myself will not, I repeat, will not be involved whatsoever in a provincial campaign. We have our own campaign to work on,” said Councillor Ford.

The mayor said that if he goes knocking on doors “it will be for Rob Ford.”

Councillor Ford dismissed the suggestion that he was distancing himself from the Ontario PCs at the party’s request, and denied the mayor’s scandals played any role in his decision. He said that he spoke with Hudak for 20 minutes on Wednesday and that the party leader “wished me all the best.”

“We’re part of the PC family,” said Doug, whose father served as a Conservative MPP in the late 1990s. “I’ve never heard anything different, unless you folks have.”

While the councillor’s days as a municipal representative appear to be numbered, he suggested that he could come back to City Hall to work for his brother in the event the mayor wins the fall vote.

“I wouldn’t rule out coming down here. I’ll work for a dollar a year,” he said. He didn’t say what role he would seek to play in the mayor’s office.

The Ford brothers have hinted in that another member of the Ford family, possibly their sister Kathy’s son Michael, might run this year to replace Doug as councillor for Etobicoke North. Asked if that was still the plan, Doug replied “maybe.”