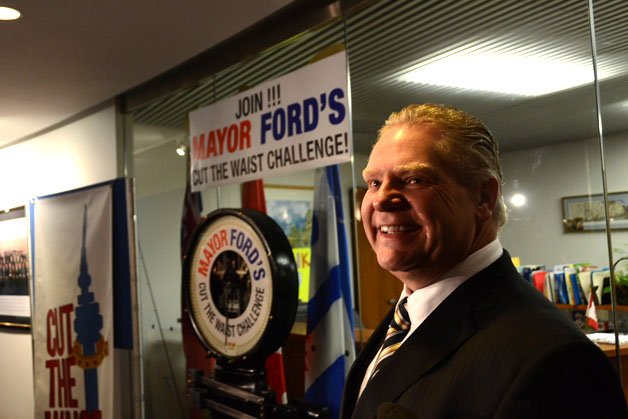 Doug Ford speaks to media outside the mayor's office

Will he stay or will he go?

Doug Ford’s appearance Friday on CP24’s Ledrew Live had the Twitterverse chirping about his political future. Is the councilor for Ward 2, also known as the mayor’s older brother, considering a jump to provincial politics?

Ford has arguably had his eye on a provincial seat ever since he came back from running the family label biz in Chi-town to back his brother’s mayoral bid in 2010. What’s a gazillion-aire with more cash than he knows what to do with, to do?

But would Doug leave little brother Rob to fend for himself at City Hall? He is, after all, supposed to be the brains of the operation at 100 Queen West.

The short answer is, definitely maybe. After all, what’s left for Doug Ford?

Already heir to the Ford family business, there’s the political legacy left to fulfill, to follow in the footsteps of his father, Doug Sr., who was an MPP under Mike Harris.

On that front, the wheels are already in motion.

Exhibit A: There’s Ford’s connection to Richard Ciano, the PC party president who was Rob’s campaign chair for a time before Nick Kouvalis (remember him?) came along to engineer that gravy train to victory. Ciano also happens to be Kouvalis’s business partner in the market research outfit, Campaign Research.

Exhibit B: The rumour mill is that Kouvalis is already angling to be PC leader Tim Hudak’s campaign chair, which is interesting for more than the obvious reasons that ties to the big blue machine would help Doug draft organizational might to his own provincial run. More on that further down.

Exhibit C: Ford just took a pass on the Etobicoke Centre PC riding nomination, which was recently handed to Pina Martino, a former special adviser to the mayor.

That development would seem counter intuitive to a provincial run for Ford. He lives in the riding. And the Liberal incumbent, Donna Cansfield, would seem a softer political target than in Etobicoke North, the area Ford represents municipally. There, Grit incumbent Shafiq Qaadri, has won with about 50 per cent of the vote or more every time out since 2003.

But Doug Ford wouldn’t be Doug Ford if he didn’t think he could beat anybody in his backyard. Besides, passing on Etobicoke Centre is about building political alliances.

Doug wants more than just to be an MPP. Shucks. He thinks he can be PC party leader. Crazy, huh? Not so much, maybe.

Looked at another way, Doug Ford’s Ciano-Kouvalis connection are the building blocks for a possible leadership coup.

Consider: Ciano’s no fan of the current PC leader, despite his public pronouncements to the contrary. The Fords have never been chummy with Hudak, either.

They supported Christine Elliott for the party leadership in 2009. Not because of her politics – Elliott is a moderate conservative – but because Elliott is the wife of close family friend and Conservative finance minister Jim Flaherty.

Never part of the PC establishment, the Fords have always felt more comfortable among the rural outsider set in the party which has grown in influence in recent years with the rise of the likes of former leadership contender Randy Hillier and a growing cabal of others of that ilk who think Hudak is not conservative enough. The Fords have been generous contributors to the cause of their campaigns for years.

Ford was certainly making his presence felt at the PC party leader’s post-election review a few months back, glad handing up a storm for Ciano’s run for party president. Nudge, nudge. Wink, wink.