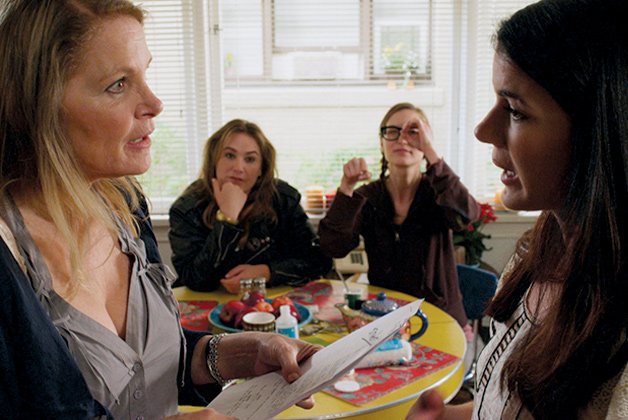 Finally, a Canadian script worthy of its excellent cast. Down River writer/director Benjamin Ratner’s story of an ailing women’s relationships with three young neighbours has brains and heart.

Born-again Fawn (Gabrielle Miller) is torn between her acting ambitions and her husband’s desire for children. Painter Aki (Jennifer Spence) wants to give it up when she realizes she may not be able to make the compromises required to sell her work. And blues singer Harper (Colleen Rennison) has self-destructive tendencies that are getting in the way of her success.

Helen Shaver plays Pearl, the young women’s personal anchor, who has a deep understanding of her their artistic aspirations after having failed to meet her own.

Ratner hammers away at the water theme, laying on the imagery a little too thick, and the soundtrack is a bit too cute. But when he stays with the emotional core of the story, the film works.

The actors are terrific, especially Spence and relative newcomer Rennison, who can actually sing, and the reveal of the significance of the film’s title is a moving moment.

Watch for a scene where Shaver and Rennison fight over the drugs they both need – for different reasons. Shaver’s a marvel.