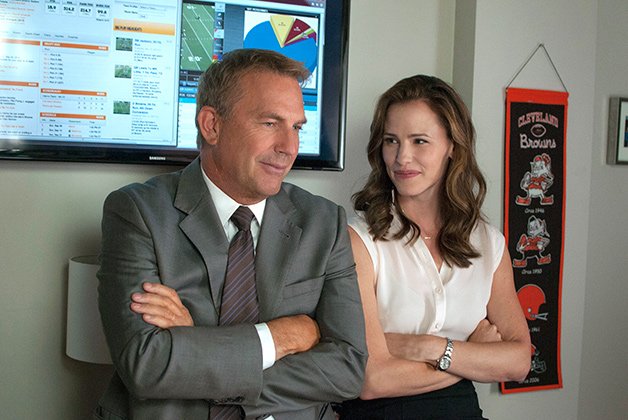 Kevin Costner and Jennifer Garner play it by the numbers.

Borrowing plays from 2011’s Moneyball, Draft Day is an entire movie built around the business of recruiting players and shaping a winning team. The action doesn’t take place on the field, but in offices and over conference calls, where general managers trade players as if they were shares on the stock market.

Kevin Costner stars as Sonny Weaver, the worn-out GM of the Cleveland Browns, who approaches the NFL draft as the unpopular leader of a desperate team. When we meet him, he’s getting lambasted all over radio and television, pressured to pull off a miracle in the draft.

Sonny has a checklist of personal issues to deal with, too. His father (the team’s former coach) has died, leaving Sonny with a legacy to live up to. And his inter-office fling (a mismatched Jennifer Garner) recently peed on a stick.

Moneyball took a novel approach by exploring the numbers you see on the backs of Fleer cards and whittling baseball down to a mathematical equation. Draft Day, on the other hand, is much more old-fashioned.

Gut instinct trumps whatever stats the professionals can conjure up, and in the end the nicest guys will get their payday while the undeservedly popular folks will be exposed for the douchebags they really are.

Sonny may be looking beyond statistics, but Draft Day plays it entirely by the numbers.