Starting Friday (February 14) and running through. 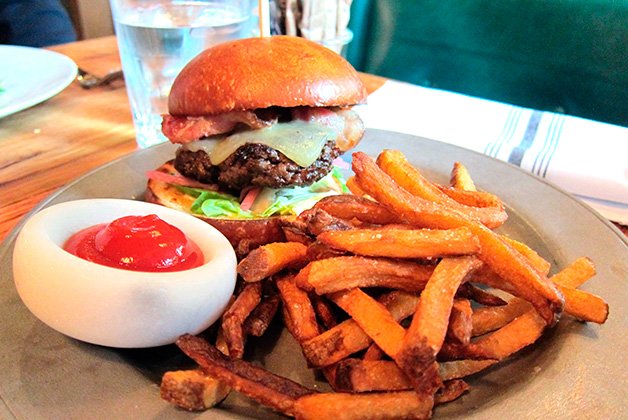 Starting Friday (February 14) and running through February 20, the Drake Hotel (1150 Queen West, at Beaconsfield, 416-531-5042, thedrakehotel.ca, @TheDrakeHotel) sells its signature cheeseburger for 10 bucks as part of a week-long lineup of artsy festivities leading up to its 10th birthday. The commemorative burger comes topped with Perth County bacon, bibb lettuce and Russian dressing, sided with chunky hand-cut fries and held together with a chopstick as it has been from day one, and is available from 8 in the morning till 11 at night.

Not content with the runaway success of his Rose & Sons and Big Crow in the Annex, former Drake executive chef Anthony Rose goes for the hat trick with the upcoming Fat Pasha. Due to launch in the old Indian Rice Factory later this spring a couple of blocks west of his existing restos, Pasha promises a contemporary Israeli-style Middle Eastern carte with an emphasis on vegetarian dishes, much like Laura Sestito and Fiona Byrne’s Scullery in Cabbagetown.

If you still haven’t booked a table for Valentines’s Day (hint: it’s tomorrow night), one of these just-announced prix fixe boîtes might squeeze you in. Over in blooming Bloordale, the Steady (1051 Bloor West, at Havelock, 416-536-4162, thesteadycafe.com) offers a $50 four-course vegan spread alongside a similar tasting geared to hardcore carnivores on Friday (February 14), with seatings at 6 and 8 pm.

Those pining for Parkdale’s sadly defunct Cowbell should make a beeline for Hawthorne Food & Drink (60 Richmond East, at Church, 647-930-9517, hawthorneto.ca, @hawthorneto), where ex-Bell owner/chef Mark Cutrara features a locally sourced three-course prix fixe on Friday (February 14). Where else will 30 bucks get you the likes of pork rillette crostini, short rib ravioli with Brussels sprouts, and chocolate-butterscotch bread pudding?