Drake’s If You’re Reading This It’s Too Late

DRAKE If Youre Reading This Its Too Late (OVO Sound/Cash Money) Rating: NNNN When Drakes 17-track mixtape landed on iTunes. 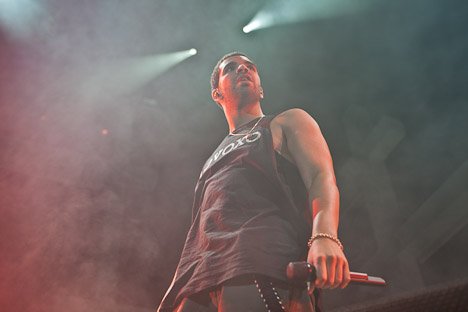 All photos by Nic Pouliot.

DRAKE If Youre Reading This Its Too Late (OVO Sound/Cash Money) Rating: NNNN

When Drakes 17-track mixtape landed on iTunes Thursday night, Time Out London took the accompanying handwritten letter the Toronto MC posted online to the British Institute of Graphologists for an extremely thorough analysis that concluded, among other things, his handwriting demonstrates a curious mix of defiance, originality, hedonism and anxiety.

Naturally, the assessment could apply to the mixtape as well, but mainly the anxiety part. If Youre Reading This Its Already Too Late begins with a sample from Ginuwines R&B ballad So Anxious that underscores the way the morbidly boastful Legend (If I die, all I know is Im a motherfucking legend) grounds the listener so firmly in the present moment.

Much like his 2013 album, Nothing Was The Same, If Youre Reading This Its Too Late finds Drake continuing to move away from the tenderness and sentimentality of 2011s Take Care and toward a dense-and-hard lyrical direction with slow, low-end heavy beats that bounce up and down in the mix, swirl around and dissolve into amorphous sub-bass.

Regardless of its status as a mixtape, If Youre Reading This feels like a proper follow-up to its predecessor. (Moreover, by selling it on iTunes as opposed to giving it away for free Drake is reportedly completing his four-album deal with Cash Money Records, thus allowing him to make a break for it as Lil Waynes acrimonious legal fight with label boss Birdman heats up.)

Drake is increasingly astute at reframing hip-hop braggadocio about wealth and competition as a kind of existential crisis through telling but now familiar details about his life (I got two mortgages $30 million in total) and subtle uses of melody and atmosphere.

On Star67, he delivers gangsta tough talk in a sad, sing-songy cadence and disappears into a distant beat emanating from what could be a Mississauga club for an extended period on the PARTYNEXTDOOR-assisted Preach.

The late-night confessional 6 Man nostalgically flips the chorus from the Roots You Got Me into an outro, while You & The 6 bluntly addresses his mothers apparently high expectations in the relationship department and empathy for a father who never stopped wearing linen and going to the club.

If Youre Reading This is full of sound-designed noises, dialogue and samples that simultaneously draw the listener in while keeping them at a distance, as if the main action is happening, frustratingly, just out of earshot.

This anxiety comes to a head near the end on Jungle, the best track. As a shuffling soul sample gently vacillates up and down in the mix, Drake points out to a lover the undermining effect his celebrity is having on their relationship. It becomes one more obstacle in a general state of indecision that he seems adept at overcoming even as it paralyzes everyone else.