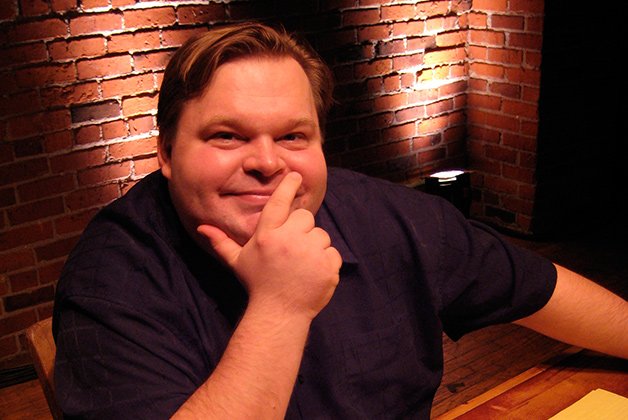 The first thing you see upon entering the seating area for Mike Daisey’s Dreaming Of Rob Ford are bright lights blaring into the theatre. Only once you sit down and the piece begins do you realize what those high beams must represent: the glare of photographers’ cameras, the intensity of an interrogation, the scary headlights a deer must see right before it’s run over.

All appropriate imagery for a monologue about our beleaguered mayor, constantly in the spotlight because of his drug and alcohol scandals, buffoonish behaviour and continual lies.

And appropriate, too, for a show by Daisey, whose fact-fudging in his previous show The Agony And The Ecstasy Of Steve Jobs created its own scandal.

The headliner of Crow’s Theatre’s inaugural East End Performance Crawl, Daisey, in his typical style, sits at a desk for 100 minutes, spinning a story about being asked by Mitchell Cushman – who directed a unique production of Steve Jobs a couple of years ago – to contribute to the Crawl and coming up with the Ford idea. He realizes he won’t be able to tell us anything about the man we don’t already know, but his outsider perspective is refreshing.

The result is a terrifically entertaining monologue, full of many insights into human behavior, including why we lie and why we have an appetite for schadenfreude – i.e., experiencing joy in the misfortunes of others.

His tangents are sometimes silly and self-indulgent – like the bit about being forced to eat poutine in Canada. But more often they’re amusing and eventually on-point. Using his booming, authoritative voice well and drawing on the techniques of stand-up comedy to switch the energy of a scene, he travels to some difficult places, chronicling his descent into depression after his own scandal broke and, in one powerful passage, showing why Ford will never give up.

And his use of language is dead-on. His description of an Ikea couch in a crack den is brilliant, and his play-by-play analysis of his own show is very savvy. David DeGrow’s lighting helps change the moods in the piece and create some very powerful shadows.

I won’t give away the main arc of Daisey’s show, which involves one huge chunk in the Ford scandal. Whether it’s “true” or not is beside the point. He’s shaped the show so that it’s dramatically apt, and like any good performer – or writer – he sells the story so that it has an emotional, and dramatic, truth.

And ultimately that’s what matters in good theatre.