NOW MagazineCultureComedyDreams Really Do Come True! (And Other Lies)

Dreams Really Do Come True! (And Other Lies) 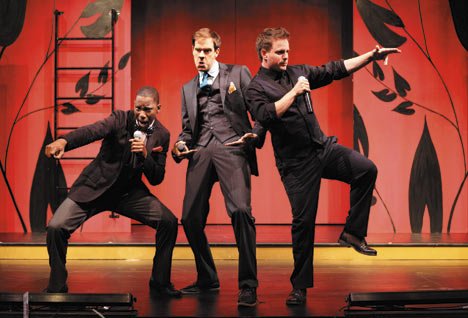 It’s amazing what four new cast members, a bold set and an amplified sound system can do for comedy. After their unremarkable last revue, Second City is back on track with Dreams Really Do Come True! (And Other Lies), a high energy, high laughs show by a talented ensemble with lots of promise.

Alumnus and first-time director Kerry Griffin gives a jolt of theatricality to the show, evident from the carnival-like opening and continuing in transition scenes via a top hat-wearing Ashley Comeau, a sort of ringleader of wicked laughs.

After a couple of rapid-fire jokes, we settle into the first sketches, one about a blind date between two intellectuals (Carly Heffernan and Alastair Forbes) who get hot and bothered by smart talk, the next about a couple (Comeau and Nigel Downer) who discover one of them’s distantly related to Hitler.

The writing in both is solid, but the performers sharpen each scene with their physicality, especially Forbes, a tall and lanky clown who’s unafraid to look silly – take a look at him a few scenes later as a bike cop in a pair of skin tight short shorts. Takes balls.

Speaking of balls, you’ll love the baseball sketch about a runner (Downer) stuck between first and third, which references silent movie and sci-fi tropes to get peals of surreal laughs.

And still speaking of balls, Forbes and Inessa Frantowski score in a scene about two friends who’ve both been dumped who awkwardly try to navigate having sex with each other.

The award for the most relatable sketch, however, goes to the one about the mom (Heffernan) who bribes her eyeball-rolling son (Downer) to help her with her with her tech problems. This one’s a keeper.

Political satire’s kept to a minimum, except for a sharp scene about PM Harper (Forbes) who alternates between two cliched responses to a soldier (Jason DeRosse) back from a tour of duty in Afghanistan. And the second act opens with a clever improvised bit about how corporate ownership changes a TV broadcast.

Some sketches are among the longest I’ve ever seen on the mainstage, but they all travel to intriguing places. The longest, which involves an audience member, explores masculinity and emotional vulnerability – a risky scene that pays off big.

This is the first show in a while where no one actor dominates each cast member gets a chance to shine. I can’t wait to see what they do next.