As a DJ, Win Butler strays from the script 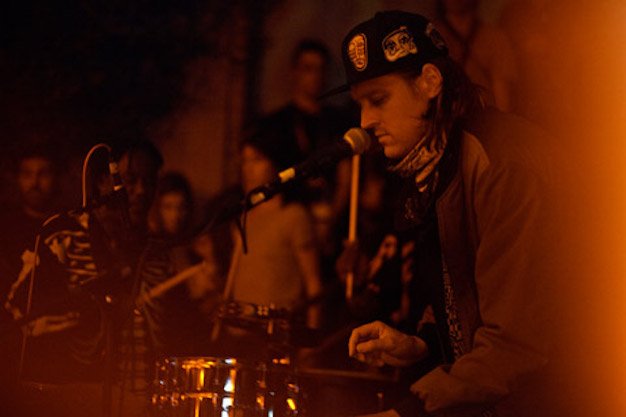 Dudebox started as a loft party in 2007 and has since grown into a charitable pop-up party that rising acts such as Jazz Cartier and Roy Woods have dropped in on to build buzz. By midnight, the dancefloor inside the makeshift venue for their NBA All-Star Weekend party – an old furniture warehouse in Liberty Village – was packed.

Hits by Rihanna, Spice Girls, Erykah Badu and Biggie had the room moving and it was clear the dancefloor was already at that point when DJ Ahmad “Tell’ ’em” Taib could’ve dropped John Cage and the crowd would’ve found a way to make it work. Dudebox took full advantage of that vibe, pulling the tried-and-true hits to segue into live Afrobeat group tucked away in a corner before a drumline brandishing LED-illuminated instruments appeared in the centre of the dancefloor.

It was so crowded that if you weren’t standing right next to either troupe, it was hard to appreciate or grasp what was happening but the presence of live musicians contributed to the anything-goes atmosphere. Diverging even further from the hip-hop bangers formula was the night’s headliner DJ Windows 98, aka Celebrity All-Star Game MVP and Arcade Fire main man Win Butler. (Proceeds from this month’s event are going to Arcade Fire’s KANPE Foundation.)

Just as he deviated from acceptable talking points during his post-game interview on ESPN, his hour-long set was resolutely off-trend. He began with punk and glam rock classics by David Bowie, Joan Jett, The Sex Pistols and The Modern Lovers. He followed Nirvana’s Territorial Pissings with aging DJ anthem Losing My Edge by LCD Soundsystem, and he mixed Motown and Kanye West with Day-O (The Banana Boat Song) and Elvis. Afterwards, Dudebox’s resident DJs Jon Chetty and James Redi took over and had people rapping along and dancing on the bar to an expertly mixed, party-rocking hip-hop set.