NOW MagazineMusicConcert reviewsDvsn sing from the shadows at the Mod Club

Dvsn sing from the shadows at the Mod Club 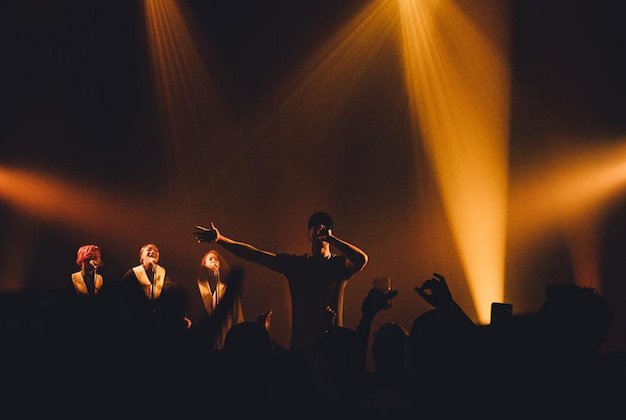 The first thing that jumps out when you hear dvsn’s music is its indebtedness to the warm, gospel-tinged harmonies of 90s R&B. It’s an influence the Toronto-based group is not shying away from on their debut tour.

The blurry line between sexual and religious ecstasy is an inescapable tension in R&B slow jams, and although several acts have cribbed elements from genre-definers such as Aaliyah, SWV and Jodeci, the OVO Sound-signed duo has probably gone the furthest in updating feel-good 90s vibes for bass-addicted contemporary ears.

At the first of the reclusive group’s two sold-out shows at the Mod Club, a trio of female background singers opened with heavenly renditions of Ginuwine’s Pony and K-Ci & JoJo’s All My Life before singer Daniel Daley emerged onto the shadowy, backlit stage and launched into Try/Effortless, off their their recently released debut album Sept 5th.

The hour-long set drew almost exclusively from that record and the music was near-continuous, with songs gently fading into one another. Too Deep gave way to a cover of Drake’s dvsn-featuring VIEWS song Faithful while a pared-back version of Prince’s Purple Rain blended into Aaliyah’s One In A Million.

Since this was dvsn’s highly anticipated local live debut as well as the Thursday before the Canada Day long weekend, the packed crowd maintained a constant stream of giddy chatter throughout the set. Many sang along to singles Hallucinations and With Me as clingy couples made out (remarkably, the guy in front of me somehow remained lip-locked while filming with a cellphone in one raised hand).

Dvsn’s other half Paul Jefferies – aka One Dance and Hotline Bling producer Nineteen85 – was nowhere to be seen, meaning attention was entirely on the four voices on stage and the way they interacted with the rich, suggestive bass sounds and trap-y hi-hats.

Daley is as classic an R&B singer as they come and deployed his falsetto runs with the restraint and precision of a seasoned performer. His only hindrance was an occasionally inconsistent sound mix. Given the show was all about a deft interplay between singers, clearer definition would have created greater impact when emphasis shifted from lead to background.

Still, the minimalist set-up nicely captured the heady sweetness of Sept 5th’s sound. This might have been dvsn’s hometown debut but it felt more effortless than momentous. If anything, they have managed to skirt the trap of self-indulgent hype to keep the focus firmly on the music.