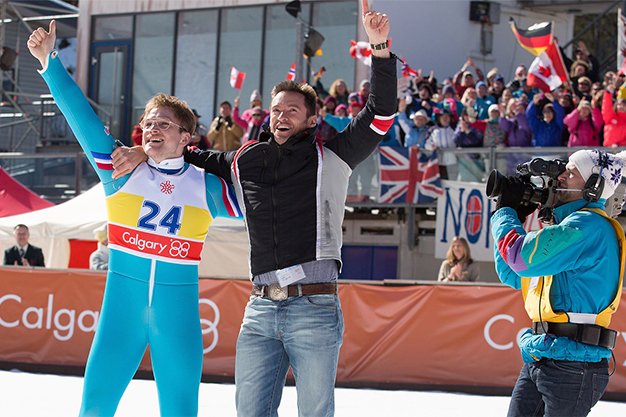 It’s kind of ridiculous that Eddie “the Eagle” Edwards should have a movie made about him. An English skier who went to the 1988 Calgary Winter Olympics as the UK’s lone ski jumper, he became a national hero simply for showing up and committing.

In narrative terms, he’s basically Rudy Ruettiger from Rudy: a sports figure whose accomplishment was just getting to play. Like Rudy, Edwards resonated with people because they saw themselves in his dogged determination and middling skill.

But where the film about Ruettiger practically canonized his pure heart and monomaniacal soul, this film is a little more cynical about the whole thing. Director Dexter Fletcher is more than happy to follow the standard sports biopic formula, framing Edwards as a noble hero pushing aside every challenge to follow his dream. But Fletcher’s also aware that the formula is kinda tired and could use a bit of a reality check.

Taron Egerton’s unflappable performance as the headstrong athlete sets the tone. He’s driven but not exactly heroic, and he’s not at all appealing. Squishing his torso down and jutting his jaw forward awkwardly to more closely resemble the real Edwards, Egerton is barely recognizable from his performance as the hero of last year’s Kingsman: The Secret Service, and even less so as Ronnie Kray’s lover in Legend.

As much as Egerton is willing to disappear into the part, Hugh Jackman is the reason Eddie The Eagle lands. As a fictional American ex-jumper who becomes Eddie’s reluctant coach after they meet in Germany, he lets us see Edwards as some sort of holy fool rather than a self-destructive twerp who’s too dumb to know when he’s outmatched and under-equipped. And then we’re off to Calgary, with Matthew Margeson’s synth-heavy score providing exactly the sort of propulsion the genre would have demanded 30 years ago.

Eddie The Eagle is perhaps best viewed as a contrast to Race, the Jesse Owens biopic that opened in theatres last week. Race, too, is about a driven young athlete and the burnt-out coach who helps him stand up to the elitist jerks bent on keeping him from achieving his potential.

The difference is that Race takes Owens’s talent for granted: it knows he’s going to go to Berlin and win four gold medals and show those lousy Nazis what’s what, so it doesn’t have to work at building the characters. As a result, Race feels flat and naive it tells, rather than shows.

On the other hand, these filmmakers are willing to bet that we don’t remember exactly how things turned out, so they have a little fun with the progression of the story. More importantly, they’re also willing to let us understand that Eddie was untrained and entirely unqualified for the sport he impulsively chose to take up and was viewed by the establishment as not only an embarrassing amateur, but a genuine risk to himself.

It’s also largely bollocks. Characters have been fictionalized, events compressed and changed for dramatic purposes, and most of Eddie’s jumps are recreated through elaborate digital means. But that’s okay. Race bullshits its way through a lot of scenes – the movie explicitly states that Leni Riefenstahl was able to shoot, cut, score and screen a key sequence of Olympia for the Nazi elite before the Berlin Games even began, for chrissakes – and most of that bullshit stinks up the room.

What Eddie The Eagle does, without ever saying so, is show us Eddie’s version of the story. So of course Eddie looks like a cockeyed genius who just had to believe in himself. By the end of the movie, everyone else believes in him, too. So did I. Nice one.