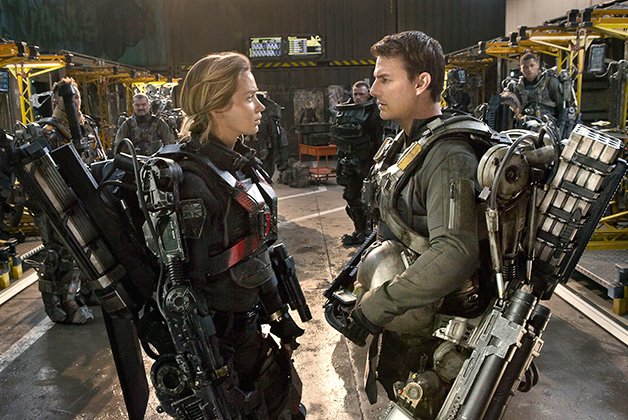 Yes, the title is bland to the point of meaninglessness. But that’s just about the only thing Edge Of Tomorrow gets wrong.

Doug Liman’s return to giddy form after the awful Jumper and the perfunctory Fair Game is a surprisingly playful mashup of Groundhog Day and Aliens. Tom Cruise stars as a cowardly soldier who’s killed battling an ET invasion in France, only to find himself reliving the events leading up to his death over and over, often alongside a veteran of a previous battle (Emily Blunt) who’s oddly sympathetic to his plight.

Using Hiroshi Sakurazaka’s graphic novel All You Need Is Kill as a springboard, Liman (The Bourne Identity, Mr. & Mrs. Smith) and his screenwriters have devised an epic-ish SF actioner that’s also refreshingly self-aware, using its rewind-repeat narrative to layer in subtle character beats, clever plot twists and at least one brilliant running gag. (I’ll need to see it again to figure out if there’s a second.)

Cruise is solid, Blunt is great, Brendan Gleeson turns up as a pissy general, and Bill Paxton is basically Groundhog Day’s Ned Ryerson in military fatigues.

Honestly, what else do you want from a summer movie?