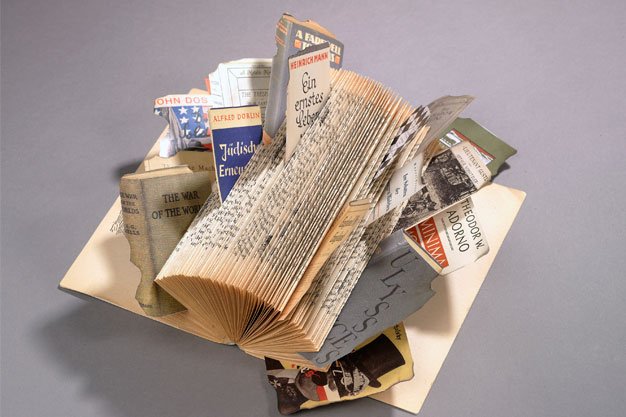 Bernice Eisensteins altered copy of Felix Saltens Bambi is part of her trove of memories.

A small room on the ROMs European floor, wedged between displays of armour and art nouveau furniture as if between war and aesthetic refinement, holds Bernice Eisensteins exhibit Genizot: Repositories Of Memory.

The Toronto author of the illustrated memoir I Was A Child Of Holocaust Survivors uses the concept of genizot, synagogue storage rooms for tattered sacred writings (normal disposal of any text containing the name of God was forbidden genizots contents were periodically buried in cemeteries), to frame her personal concerns with 20th-century history.

Eisenstein works within the tradition of reverence for the word in her series of black-and-white gouache portraits of 20th-century literary and cultural figures, bookended by two images of the artists mother. Not all are Jews, but Eisenstein connects them to her narrative: Antoine de Saint-Exupery dedicated The Little Prince to Jewish author Leon Werth, who also gets a portrait German doctor Alois Alzheimer appears next to Regina Eisenstein.

The portraits are similar to those in Correspondences, her recent accordion-fold book created with Anne Michaels, but here her intense, naive, off-kilter depictions are embellished with words: a list of the Nazis degenerate artists surrounds Stefan Zweig text from Remembrance Of Things past runs in every direction behind Marcel Proust photographer Chim (David Seymour) stands before an inventory of his pos-sessions and announcement of his death by Magnum, the agency he founded.

A vitrine in the centre contains small trinkets, more portraits in the artists handmade books, a copy of Felix Saltens Bambi into whose folded pages she inserts tiny facsimiles of covers of classic 20th-century novels and an altered copy of Robert Walsers The Walk.