John Tory has SmartTrack, Olivia Chow is on. 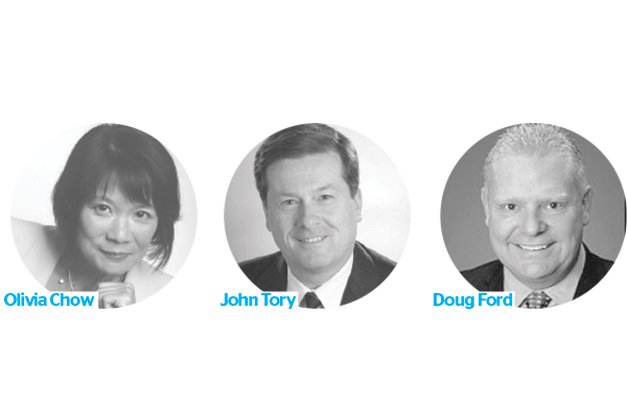 John Tory has SmartTrack, Olivia Chow is on the buses and Doug Ford’s in subway fantasy land, but how do they rate on the other thorny issues? Here’s a decoder.

The only leading candidate calling for a ban on the police practice of carding. Is pledging to sit on the Police Services Board as mayor to renegotiate the controversial shift schedule that sees cops paid 28 hours for every 24 hours of work.

Promises to create 15,000 new privately owned, affordable rental homes. Has suggested creating a separate agency for seniors housing, a possible first step in breaking up the Toronto Community Housing, which many housing advocates believe is too large to address the day-to-day needs of tenants.

Taking a page from New York City mayor Bill de Blasio’s book, Chow is advocating a “Target Zero” approach to pedestrian safety by allowing communities to reduce speed limits and reconfiguring the 100 most dangerous intersections. Chow’s $4 million bike plan, however, budgets only $20,000 per kilometre of bike lane, but painted lanes cost at least $25,000 per kilometre, while separated lanes can cost up to $1 million.

A strong advocate for ranked ballots. Also backs extending voting rights to permanent residents. Wants to give integrity commissioner more power and ask the province to enact harsher financial penalties for councillors who break the Code of Conduct.

Supports arts funding target of $25 per capita and indexing billboard tax to rate of inflation. Pledges to follow through on creation of a city music office and wants to create a public art foundation.

Suggests a robustly funded police department is the most important factor in community safety, which isn’t supported by evidence.

Would convene a task force to restructure TCH. Proposes to create more affordable housing through tax incentives and Section 37 money, but has no hard targets. His plan to spend $864 million on repairs merely duplicates what the city is already doing.

Released a 10-point code of conduct shortly after entering the race, but hasn’t done enough to assuage concerns his various business interests could put him in many conflicts of interest situations. He’s promised to consult the integrity commissioner and (maybe) would put his stock holdings in a blind trust. Opposes ranked ballots.

Also supports $25 per capita target and music office. Says he would look into expanding the billboard tax or a new, similar source of arts funding. Wants to explore ways to convert abandoned and city-owned properties into affordable arts venues.

Likens reforming the police budget to buying batteries in bulk from Costco, but as usual Ford’s numbers don’t add up. His full-throated support for “frontline officers” is a signal he wants to maintain the unsustainable status quo on police salaries.

Has a track record of voting against affordable housing projects famously doled out $20 bills to residents of an Etobicoke housing project in a display of populism that would have made Pablo Escobar proud.

Would also continue building separated bike lanes downtown, but ridiculed calls to lower speed limits and temporarily close off roads to cars in residential areas. Has dismissed the Eglinton Connects plan as a “war on the car” that could negatively affect the auto industry.

Supports an eight-year term limit for council members. Would cut council in half, from 44 to 22 members. Voted against ranked ballots. Opposes giving permanent residents the right to vote in city elections.

Has boasted that no mayor has put more money into the arts than his brother, but the increase in per capita funding was driven almost entirely by a grassroots campaign to fund arts through a billboard tax.