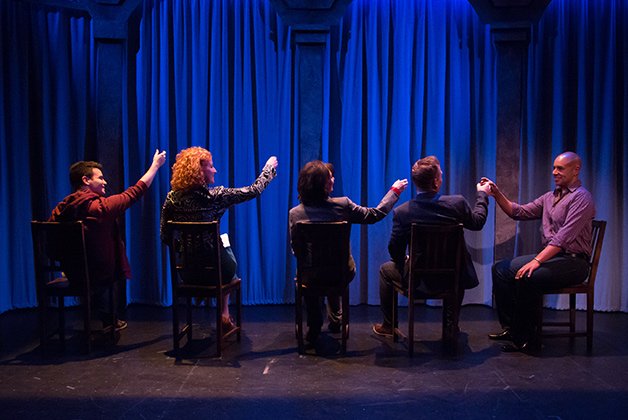 In Elegies: A Song Cycle, composer William Finn celebrates and says farewell to family members and friends. The 20 songs that make up this cycle have sad moments, of course, but the entirety is life-affirming and often clever and funny, even if the material isn’t always strong.

Acting Up Stage, which had a hit with the show seven years ago, brings it back for the company’s 10th season, along with most of the original cast and director Lezlie Wade. The performers are even better than before, in part because they bring a richer life experience to the emotionally truthful lyrics.

Memorials to Finn’s friends who died of AIDS are the most powerful numbers, especially Mark’s All-Male Thanksgiving, rendered perfectly with joy, sadness and wistfulness by Thom Allison, who does an equally fine job with Venice and The Ballad Of Jack Eric Williams, which works a touch of anger and pain into its finale.

Barbara Barsky shines in the ballad Infinite Joy and shows her comic side in Only One as a tart, demanding teacher who knows she’ll only inspire the rare student. She combines the touching and the humorous in 14 Dwight Avenue, with new cast member Joel Gomez as the young son of her elderly mother.

Gomez has charm and a good voice, but he’s given several of the less memorable comic numbers, including My Dogs and Fred.

Still, not all the humorous songs are weak Eliza-Jane Scott creates a whole world in Passover, starting with warm laughs and later revealing the melancholy beneath. She also scores with Anytime, which quietly links the living and the dead.

Scott teams up with Steven Gallagher in Goodbye/Boom Boom, an intentionally gasp-inducing look at the Twin Towers tragedy, while Gallagher knows how to sell his own brand of rueful comedy in Mister Choi And Madame G.

Working with pianist John Hughes, the uniformly compelling company makes the most of the songs, knowing how to find their universal heart and making us understand why at certain points words aren’t sufficiently expressive and simple vocalizing is more potent. It’s great to hear these voices, unamplified, in an intimate setting.

You’re guaranteed some good laughs and the occasional tear, just what Finn intends.