Doug Ford has declared class war on John Tory, calling him an elitist who's had everything handed to him on a silver platter. Ford wants to live with the common people, even if he is a millionaire 20 times over. Who's the real folk hero in the mayor's race? Hint: it's the only woman in the contest. 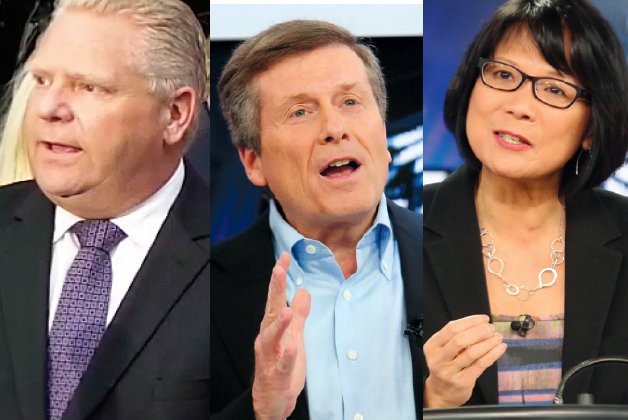 JOHN TORY Blueblood who traces his lineage to 1780s Nova Scotia lieutenant-governor grew up with the trappings of old money: private school, partner at prestigious family law firm straight out of university. His old man was a trusted adviser to the Thomson family of media empire fame.

OLIVIA CHOW Daughter of Hong Kong immigrants who grew up in St. James Town having to watch every penny. Father worked odd jobs delivering pizza and driving cab mother worked as a seamstress, a maid and in a hotel laundry.

JOHN TORY Bay Street millionaires club. Still serves on the Rogers board of directors. Was a consummate backroom boy involved in Brian Mulroney’s and Kim Campbell’s campaigns before he decided to vy for political office. Ride 2000 Lexus SUV, but professes a special affinity for Jeep Cherokee.

OLIVIA CHOW Resigned her seat in Parliament, and lost the $163,700 yearly salary that goes with it, to run for mayor. Copped a book deal in the lead-up to her mayoral run. Ride Her bike when she’s not taking the TTC.

OLIVIA CHOW Stornoway, official residence of the leader of the opposition, for a short time before her late husband, NDP leader Jack Layton, died. Still lives with her mom in the house on Baldwin she shared with Layton. Lived in co-op before that.

DOUG FORD Likes to throw $20 bills at poor people every time he gets a chance donates his $100,000 councillor salary to community groups, but is that charity or vote-buying? Wanted to line the port lands with yacht club and high-end retailers running to preserve the Ford family political legacy.

JOHN TORY Conspicuous presence at beer fests big and small in a naked appeal to Ford Nation, he showed up in a Leafs jacket for a one-on-one with Globe reporter in Jane and Finch early in the campaign.

OLIVIA CHOW Got her political start championing school nutrition programs. Represented one of the most diverse areas of the city as councillor and later MP since 91.

DOUG FORD Thinks anyone who criticizes his mayor brother is a racist (see the shirtless jogger incident) has never asked Rob to explain that “kikes,” “wops” and “niggers” tirade claims to have nothing against gays – he just won’t participate in the Pride parade would like autistic kids to stay indoors.

JOHN TORY Winner of the Black Business and Professional Association’s Diversity Award in 2011 as head of CivicAction pushed transit and investment in priority neighbourhoods says would pull funding for Pride if QuAIA is allowed to participate.

OLIVIA CHOW The only member of a visible minority among the top mayoral contenders only woman only one for whom English is second language, making her the target of racist attacks from Ford supporters. Named one of the top 25 immigrants to Canada by Canadian Immigrant magazine in 2012.