More concerning to Albertan progressives than a high Conservative seat count, is the drop in federal NDP support to 6 per cent below 2011 levels 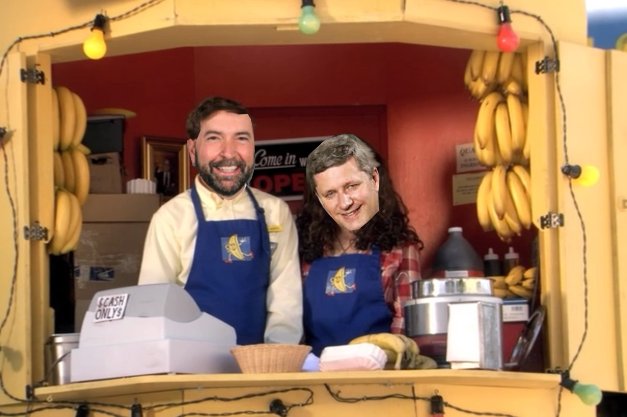 A totally flawless representation of what it would look like if Tom Mulcair and Stephen Harper were characters on the Arrested Development program.

Albertans who six months ago put an end to the province’s Conservative dynasty by electing 53 New Democrats decided to make history in a different way in the October 19 federal election by handing their support to the Liberals.

It may come as a surprise to voters in central Canada, but the urge to get rid of Stephen Harper was just as pronounced in his own backyard as it was across the country.

But when the votes were counted, Harper had managed to hold onto 29 of the province’s 34 seats. The Liberals won four, including two in Calgary, marking the highest number of seats the Grits have won in the province since Trudeaumania in 1968. Strategic voting worked for the Liberals – and some Conservative candidates who benefited from vote-splitting – but not the NDP which was left holding on to the one seat they had before the election, Linda Duncan’s in Edmonton Strathcona.

The NDP was hopeful it could pick up a handful of seats in Edmonton, Calgary and even Lethbridge in the afterglow of NDP premier Rachel Notley’s win. The party had placed second in several contentious ridings in Alberta in the 2011 federal election.

“The NDP vote collapse is evident,” says Melanee Thomas, an assistant professor in political science at the University of Calgary.

Nowhere was that clearer than in Edmonton Centre, a riding that leader Thomas Mulcair visited repeatedly during the campaign.

The NDP finished a strong second in the two previous federal elections in the riding. And with long-time Conservative incumbent Laurie Hawn not running, the chances looked good for NDP candidate and Alberta Federation of Labour presi-dent Gil McGowan.

But the political tide shifted for the Liberals in the last few days of the campaign. Olav Rokne, a worker on McGowan’s campaign, noticed the turn at the doors.

“I was being told, ‘I prefer Gil, but am so afraid of Harper, and looking at the national polls, I’m voting Randy,’” says Rokne. Liberal Randy Boissonnault ended up taking out the Conservative by just under 3 per cent of the total vote.

In Edmonton West, a recently redistributed riding, Brent Oliver, who has voted NDP his entire life, decided on the Liberal camp for the first time.

“It pained me to see how many seats the party [NDP] lost as an anti-Harper statement,” says Oliver. Strategic voting didn’t work in Oliver’s riding, however, which elected a new Conservative MP, Kelly McCauley.

“People identify as Conservative here either as an ideological identity or party identity,” she says, “and that hasn’t changed much at all.”

That’s not to say, however, that voters in Alberta have markedly different views from the rest of Canada when it comes to the niqab.

Albertans by the thousands posted their stories about immigrating to Canada, how proud their parents were about taking the citizenship oath in a country that allowed freedoms and how the current government no longer represented those values.

Calgary Mayor Naheed Nenshi,  Canada’s first Muslim mayor,  very publicly entered the fray, meeting with Trudeau and speaking out about embracing immigration and diversity. His speech, The Canada We Hope For, was republished in the Globe and Mail.

More concerning to Albertan progressives than a high Conservative seat count, is the drop in federal NDP support to 6 per cent below 2011 levels.

“And that’s factoring in the considerable effort that Notley gave the federal party,” says Brock Harrison, a former director of communications for the Wildrose Party. “It didn’t move party [support] one bit.”

Alberta may become a progressive power base regardless of the majority of Conservative seats. In terms of achieving progressive policy goals, Alberta is in a much better position after the Liberal win, says Harrison.

The elected Liberal MPs include good choices for cabinet, among them a former three-term city councillor, two experienced MLAs and a Rhodes scholar.

Provincially, Notley’s government stands to benefit, too, from a federal government not just more interested in federal-provincial relations, but  elected with a progressive platform with similar messaging to Jack Layton’s New Democrats.

“The tone is going to be that it’s legitimate [for us to] actually do something,” says Thomas, which means the provincial government can work on details of a progressive program rather than simply getting it on the agenda in the first place.

Progressive Albertans who marked their X for the Liberals over the New Democrats expect the Trudeau government to follow through on commitments.

Samantha Power is an Edmonton-based journalist and freelancer. Her writing appears in Vue Weekly and The Tyee.