At a meeting shrouded in secrecy, housing board decides not to fire Eugene Jones over misconduct allegations 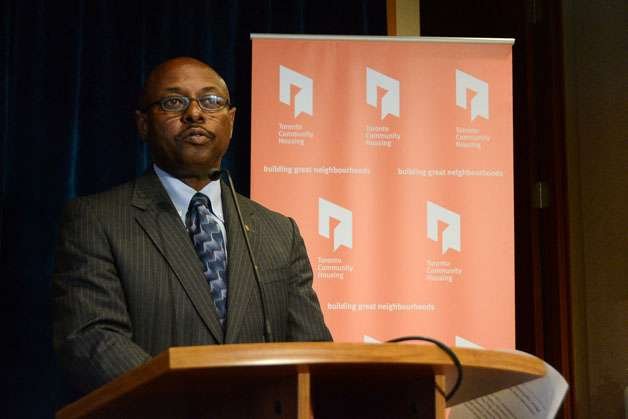 Eugene Jones addresses the TCH board in February

The controversial CEO of Toronto Community Housing has kept his job, but faces discipline for his role in the latest scandal to hit the troubled agency.

After a closed-door meeting at TCH headquarters that lasted four-and-a-half hours on Thursday, board members decided not to turf Eugene Jones despite accusations that he violated agency policy by firing a top executive without their consent.

In a press conference afterwards, board chair Bud Purves voiced his support for the CEO, and said that the board had laid out a plan to “strengthen his managerial practices.”

“Gene’ s vision and passion for improving the quality of our housing… has been very responsive to the needs of our residents and made a real difference,” Purves said. “However, the board agreed that there are areas that improvement of management style and performance are needed and we’re looking forward to working with Gene on this plan.”

The plan includes hiring an executive coach for Jones, sending him to a university executive leadership program, linking half of his bonus to improvements in managerial performance, and enrolling him in a peer mentoring program. Jones, who makes $250,000 a year, will also not be eligible for a bonus for 2013, and will face a performance review in six months.

The sanctions comes after the social housing provider called in a law firm to investigate allegations that Jones unilaterally fired chief operating officer Kathleen Llewellyn-Thomas just four months after she started the job. The TCH board is supposed to authorize the dismissal of top executives, but according to at least one board member Jones told them in an email that that Llewellyn-Thomas had resigned.

According to the Toronto Star, Jones allegedly gave her a $150,000 severance.

Jones was also accused of directing staff to alter pay records after his assistant racked up enough overtime to push her salary above $100,000. Public sector salaries higher than that amount must be published on Ontario’s so-called “sunshine list,” which would have created a potential embarrassment for the cash-strapped organization. At last count, the agency was facing an $862-million repair backlog.

According to Purves, the investigation concluded that Jones “failed to exercise proper judgment and oversight and follow board processes and procedures.” Purves denied that there was any attempt to manipulate the sunshine list, and said that Jones “didn’t lie to the board, in his mind” about the dismissal of the COO.

But what exactly Jones did to warrant discipline is unclear because no one at TCH would discuss it. Purves would not go into details about the results of the investigation, saying its conclusions were confidential. Nor would he say what exactly was voted on during the board meeting. He would neither confirm nor deny the allegation that Jones improperly authorized a publicly-funded, six-figure settlement to the former COO.

Jones himself was unavailable for comment Thursday, according to two TCH spokespersons. He did not attend the board meeting and neither spokesperson would not say where he was or when he would answer questions about his conduct.

Board members who left the meeting before Purves’s press conference declined to discuss details of their closed-door meeting. But Councillor Cesar Palacio said he was “very glad that we have reached a compromise.”

“We have a phenomenal CEO that will continue to have the trust of this board,” he said.

Another board member, Councillor Ana Bailao, had a more lukewarm response.

“We made a decision and we are moving forward,” said Bailao. “I think the board worked really hard to come up with a decision to bring some stability to the organization.”

Asked if Jones still has her confidence, Bailao walked away.

Councillor Maria Augimeri, who also sits on the board, said the fact that many tenants support Jones was a major factor in the decision not to fire him. But she added that “there are improvements that could be made” to his leadership.

Mayor Rob Ford has backed Jones since he was appointed in 2012, and at a press conference Thursday evening he said he still supports the housing czar “a hundred per cent.” Ford equated the CEO’s conduct with a minor infraction that merited him “two minutes in the penalty box,” but said he didn’t support forcing him to undergo executive training.

“Him not getting a bonus I think is a big enough penalty,” Ford said. “What they’ve done is gone a little bit too far in sending him to school. I don’t think they have to spend that kind of money.”

Ford said Jones doesn’t need to be taught how to run the agency.

“I think Eugene Jones knows how to coach. He’s been the captain of the team at Toronto Community Housing for the last couple of years,” the mayor said.

Ford’s comments were markedly different from his reaction to a scandal at TCH earlier in his term. In 2011, he demanded that the agency’s board be dissolved after the city auditor unearthed a litany of inappropriate expenses and wasteful contracts. The mayor had Case Ootes, a former member of his transition team, appointed as a one-man board. He promptly fired then-CEO Keiko Nakamura, a move that was supported by the mayor.

Jones was hired a year later to turn the organization around.

Although his job appears safe for the moment, it’s likely he will soon face more questions about his managerial style, described by some as overly aggressive. After receiving numerous complaints, the city ombudsman launched an investigation into his hiring practices last year. She expects to publish a report this spring.