Two of Britain's finest muscle up for a comic caper pic 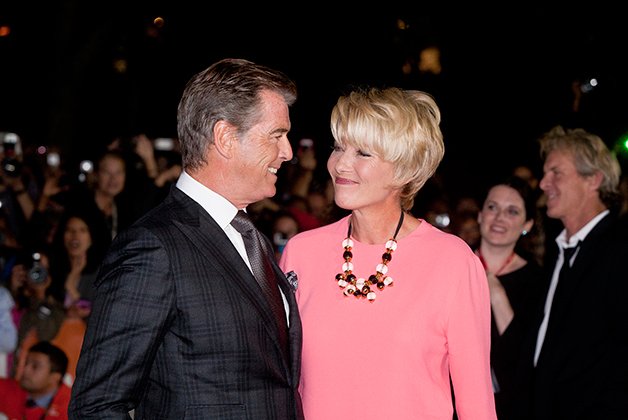 The woman who’s made a career playing utterly proper, upstanding characters – often in period dress – is telling this to a table full of journalists before the world premiere of The Love Punch at TIFF.

“I talked to Sean Penn recently, and he’d just finished one. He said he was covered in bruises, that he had bruises on his bruises,” she says in her typical blithe manner. “I want that! I want to get all ripped like Linda Hamilton in T2 and have muscles on my nose.”

Ironic, because her Love Punch co-star, Pierce Brosnan, who’s seated next to her, has executed his fair share of action sequences as James Bond. The two play a divorced couple who get caught up in a comic Côte d’Azur caper after they discover they’ve been swindled out of their life savings by a sleazy French con man.

“I’m largely known for being in a certain genre of film,” adds Brosnan, “and it was great to be able to turn it on its head, inside out and back to front.”

This is the first time the two have worked together, and they have nothing but good things to say about the process.

“He’s the most graceful man on the screen,” she says. “He’s the Rudolf Nureyev of movement.”

Brosnan, meanwhile, says Thompson is an amazing actor who covers the gamut of emotions and characterizations.

Neither considers The Love Punch aimed at the same greying demographic that made films like The Best Exotic Marigold Hotel a huge hit.

“You can’t think like that,” says Thompson. “It might not work or [that audience] might not like it other people might prefer it. I hope my 13-year-old daughter will get just as much of a kick out of it as my 80-year-old mum, and everyone in between. Otherwise, what’s the point?”

Not that she’s happy with all the films marketed toward adolescent boys, like the Transformers movies.

“Unfortunately, a lot of films made for 17- or 18-year-old boys are really empty,” she says. “I see a lot of them because I have nephews. I watch them and think, ‘God help us. If that’s what we’re offering our kids, then what are we saying about how we value them?'”

If The Love Punch is successful, would they consider doing a sequel?

“Yes,” says Thompson. “But I’d want more action in it. Including a training montage. I love those.”