Weekend Movies: Emptying the Skies, Rosewater, Dumb and Dumber To and more 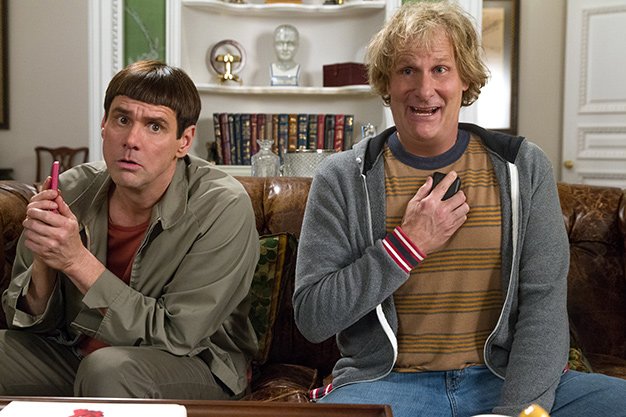 Dumb and Dumber To

Emptying the Skies (Douglas Kass, Roger Kass) focuses on the disturbing practice in southern Europe of illegally poaching migratory songbirds for consumption as culinary delicacies. Based on a New Yorker article by novelist Jonathan Franzen, the Kasses’ doc follows a group of activists from the Committee Against Bird Slaughter (CABS) who travel to Cyprus, Italy and France during migration season, freeing their feathered friends from sadistic traps and occasionally being chased off private property by gun-wielding landowners. While the film lacks some momentum, the directors subtly reveal details about the volunteers (oddly, they’re all male), many of them professionals who take part in the expeditions during their vacation. Their stories and their efforts, as well as accounts by ornithologists, will warm your heart and attune your ear not only to the sound of birds, but to this noble cause. Some subtitles. 78 min. NNNN (GS)

Goodbye to Language 3D (Jean-Luc Godard) is not a masterpiece (in truth, it’s pretty much a mess), but it’s the work of a master who’s willing to reinvent the way we perceive narrative. At key moments, Godard and his cinematographer, Fabrice Aragno, desynchronize the two sets of images that our brains (and those glasses) fuse into a three-dimensional image. Close your left eye and watch the camera follow one participant in a scene close your right and see the other participant, standing still. Godard being Godard, this revelatory technique is used mostly in the service of a banal series of conversations in which lovers walk around a house in various states of undress, yammering about philosophy and cultural theory in that uniquely French mode of intellectual exhaustion. Subtitled. 70 min. NNNN (NW)

Rosewater (Jon Stewart) finds first-time filmmaker Stewart tackling a story close to home: the ordeal of Iranian journalist Maziar Bahari, whose appearance in a Daily Show segment about the 2009 Iranian election was a factor in his subsequent arrest, detention and torture by the Ahmadinejad government. But Rosewater isn’t just about incarceration. Stewart also recreates Bahari’s experiences in his homeland in the days leading up to the election, when he talked to fundamentalists determined to hold on to power and progressive-minded youth driven to educate themselves about the outside world and point their country toward the future. It’s an assured, thoughtful and ultimately very moving debut, with fine performances by Gael García Bernal as Bahari and Danish actor Kim Bodnia (Pusher) as his interrogator. 103 min. NNNN (NW)

Beyond the Lights (Gina Prince-Bythewood) is a love story about an English hip-hop singer who falls for the Los Angeles cop who stops her going over a balcony. Writer/director Prince-Bythewood (Love & Basketball) invests her characters with three dimensions and compatible personalities. Each has been raised by a single parent devoted to their success: Noni (Belle’s Gugu Mbatha-Raw) by her controlling mother (Minnie Driver) Kaz (Red Tails’s Nate Parker) by his cooler but no less determined dad (Danny Glover), who’s charted a path to the White House for his eminently respectable son. But having established Noni and Kaz as complex, intelligent souls who are worthy of one another’s validation and love, Prince-Bythewood has to spend another hour and a half inventing increasingly silly obstacles to their happiness. The film reminds us why straight-up romances are so few and far between: the genre depends on contrivance more than almost any other. But when the couple clicks, it still feels pretty damn good. 116 min. NNN (NW)

Keep on Keepin’ On (Alan Hicks) is a pedestrian but likeable portrait of Clark Terry, whose inspiring career as mentor and educator is just as important as the magisterial trumpet-playing for which he’s beloved. Now in his 90s, Terry has kept on teaching despite debilitating diabetes. His latest pupil is young pianist and rising star Justin Kauflin, who has a rare disease that gradually robbed him of his eyesight. Succinct tributes from the likes of Herbie Hancock and Quincy Jones address how essential the development of an individual voice is for anyone seeking a meaningful place in jazz. Terry’s contribution to this discussion is his emphasis on self-knowledge: that individual voice isn’t something you put on, but rather, through reflection and discipline, draw from deep within yourself. 86 min. NNN (NW)

One Chance (David Frankel) is a cheesy but entertaining biopic about operatic tenor Paul Potts (James Corden), who achieved overnight success on the TV show Britain’s Got Talent but put in lots of work and experienced heartbreak and hurt before that fateful night. Born to working-class parents, the pudgy Paul was bullied throughout childhood, which crippled his self-esteem. When he got an early shot at realizing his lifelong dream of becoming an opera singer, he choked. With a strong woman on his side (Alexandra Roach), however, and a friendly mate (Mackenzie Crook) at his cellphone sales job, he gets back on his feet, despite the many obstacles. While this classic underdog story is anything but subtle (Julie Walters, as Paul’s mom, is unbearably hammy), Corden (recently tapped to succeed Craig Ferguson as host of The Late, Late Show) infuses his role with heart and pathos, and he and the bright-eyed Roach share a sweet, jokey, believable chemistry. 103 min. NNN (GS)

The Better Angels (A.J. Edwards) is what we get when someone tries to make a Terrence Malick movie about the young Abraham Lincoln without the advantage of actually being Terrence Malick. The impressionistic sweep is there, but not the grace. Writer/director Edwards comes by the connection honestly – he worked on The Tree Of Life and To The Wonder, and Malick is an executive producer – but he’s still just borrowing his mentor’s style, to no real end. Edwards deploys all of Malick’s signature moves – swelling score, sun-dappled camerawork, hesitant voice-over narration – and even shoots in black-and-white for extra sobriety. But he lacks Malick’s innate sense of pacing and escalation, so individual scenes hang limply when they should be building toward an ecstatic, revelatory climax. Unmoored, the actors, including Braydon Denney as young Abe, Jason Clarke as his father, Brit Marling as his mother and Diane Kruger his father’s second wife, struggle to invest their characters with depth or even a semblance of personality. 94 min. NN (NW)

Dumb and Dumber To (Peter Farrelly, Bobby Farrelly) settles for revisiting the inane toilet humour of the 1994 original, where fecal matter is repeatedly and democratically spread around. The Farrellys don’t seem to realize that shit goes stale, too. Once again Harry (Jeff Daniels) and Lloyd (Jim Carrey) live up to the adjectives in the title as they head out on a road trip to track down the former’s daughter (Rachel Melvin) an adopted child he’s just learned he fathered. There are certain gags here that benefit from Carrey’s physicality, the elasticity in his step proving more effective than the constant scrunching of his face. The Farrellys do have a knack for setting things up, using close-ups surprise us with what’s barreling toward the next frame, but these provide only a few minor chuckles and one legit laugh. 109 min. N (RS)

Wolves (David Hayter) is an inauspicious directorial debut for superhero screenwriter Hayter (X-Men, Watchmen). The slapdash nature of the production suggests this doesn’t reflect his original vision, but it doesn’t seem like this werewolf-centric Twilight knockoff would ever have amounted to much, with its dopey mythology about an orphaned high-schooler (Lucas Till) who discovers his lupine side and makes his way to a remote mountain town filled with shapeshifters under the thumb of an alpha male (Game Of Thrones’ Jason Momoa, sporting grey contact lenses for no particular reason) bent on siring a new heir with a comely pureblood (Merritt Patterson). Decent monster makeup can’t paper over the total lack of ideas, and fun supporting turns from Stephen McHattie and Melanie Scrofano left me wishing Hayter had made the movie about their characters instead. 91 min. N (NW)

Hermitage Revealed (Margy Kinmonth) is a high-def tour of the State Hermitage Museum in St. Petersburg, one of the biggest and oldest museums in the world. 83 min.