Just close the horse-killing spectacle down 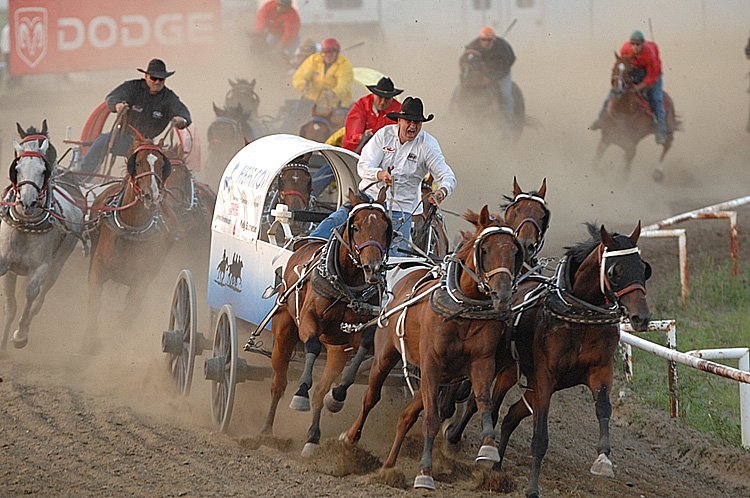 For the last 25 years, an average of two horses die every year at this barbaric thing.

It’s time to shut down the chuckwagon race.

Not only that, but the Stampede organizers should contribute 100,000 hours of community service at one of Calgary’s animal shelters and pay fines of $50,000 for each horse that’s died unjustly at its rodeo.

This proposition will sound unreasonable to many, but not as unreasonable as the chuckwagon races themselves.

These are spectacles which humans gather to watch the inevitable destruction of animals. There’s little difference in the end result of Thursday’s chuckwagon race (and almost every one since 1986) and a dog fighting match. Animals die.

The Stampede has had mixed reaction to questions about how it treats living creatures.

It recognizes that the gore of a slain animal is not a welcome sight, which is why maintenence workers rush onto the race track to cover the dead or dying animals immediately.

It also performs audits of its animal treatment to justify its practices. Temple Grandin, farm animal rights activist, was brought in last year to say it’s not the fault of the Stampede that horses die every year, but it’s how the horses were bred.

I’m under no illusions as to what happens to animals, including horses, at farms or slaughterhouses. They are killed. But there is a lot of effort to do this more humanely, and those times an animal meets its end are for some greater purpose, like saving it from suffering or to enter the food chain.

But watching the unnecessary suffering of animals for sport should be illegal. I’m not sure what able-minded adult would want to see that anyway.

Crowds gathering to view animals die in public, for no reason other than to keep up a tradition at a rodeo, sends a pretty awful message also. It says Canada doesn’t value animal life. All the time, effort and money we put into policing farms and zoos, making sure they adhere to our high ethical standards of animal welfare, is but a decoration. Our animal cruelty laws don’t apply to the organizations that bring in money to Calgary.

That’s why the Stampede needs to do something drastic, and something public. No more insignificant fines to reckless racers, no more apologies. Not one more of these magnificent beasts should die unjustly in a chuckwagon race. Close it down.