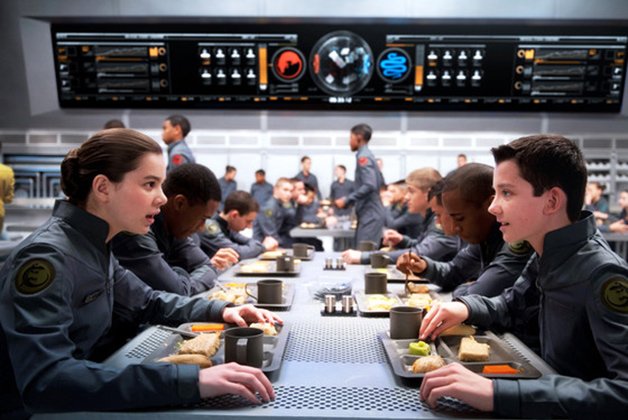 Gavin Hood’s adaptation of Orson Scott Card’s 1985 novel Ender’s Game is a very expensive, very elaborately designed movie about a remarkably talented boy who’s accepted into a school for people just like him. He overcomes social anxiety to win the respect and admiration of his classmates, rising to a position of prominence and ultimately saving everyone from a dark force bent on the destruction of our way of life.

In fairness, Card wrote his hero’s journey a good decade before J.K. Rowling invented her boy wizard. But Hood’s movie shamelessly attempts to set up a new super-franchise along the lines of the Harry Potter films, throwing money and visual effects at every concept that even seems like it might resonate with the young audience that powered those eight movies into the box-office record books.

In the not-too-distant future, a couple of decades after Earth barely fought off an alien invasion, humanity is stoically preparing for another interplanetary war.

Children are the soldiers of this future, and the gruff Colonel Graff (Harrison Ford) believes he’s found the best of the best in Ender Wiggin (Hugo’s Asa Butterfield), a gifted strategist with a willingness to sacrifice his comrades if it gets him closer to winning the game – because in war, thinking about mercy or compassion will get you killed.

Ender is shipped to Space War school, where he tentatively bonds with classmate Petra Arkanian (Hailee Steinfeld) and distinguishes himself with exemplary strategy in a series of zero-gravity contests. And then they graduate to elaborate simulation battles, allowing James Cameron’s CG shop Digital Domain to show us exactly why it gets co-producer billing on the picture.

So, yes, Ender’s Game is a visual spectacle. No expense has been spared. Everything looks stunning and shiny and crisp, and the zero-g sequences are appropriately convincing. The problem is that it never comes to life.

The first and foremost weakness is the character of Ender himself. He’s about as dynamic as Harry Potter was in the first three or four movies: people are constantly telling him he’s fantastic, and he worries that he isn’t. Butterfield is an awfully tentative actor, and can’t really convey any deeper gravitas or power. When Ender’s supposed to be a smartass and push back against authority, Butterfield just seems pissy.

Steinfeld isn’t much better as Petra, though she’s less awkward than she was in Romeo & Juliet. The only interesting performance comes from Moises Arias as dickish antagonist Bonzo Madrid, and that’s because I kept flashing back to his amazing tragicomic turn in The Kings Of Summer.

The adult cast doesn’t do much better. After being so unexpectedly textured in Paranoia, Harrison Ford slumps back into cranky cheque-cashing mode. As his concerned assistant, Viola Davis does a fine job of making the same three or four lines sound novel. Ben Kingsley, who shows up late in the game as a legendary Maori pilot, at least enjoys his ridiculous accent.

Butterfield’s weakness is a big problem, but it’s not the worst thing audiences will have to contend with. That would be screenwriter and director Hood, he of the shameless Tsotsi, the mechanical Rendition and the dopey X-Men Origins: Wolverine. He’s a hack with no vision of his own every movie he’s made is a reworking of elements from other, more successful movies, and all he does here is apply the aesthetic of Christopher Nolan’s Batman trilogy to Card’s novel.

Ender’s Game is told with deliberate visuals and an agitated musical score (here, Steve Jablonsky aping Hans Zimmer’s constant thrumming of Dark Knight compositions), with an atmosphere of grim urgency. Even the early game sequences are framed and scored with absolute seriousness. We’re not allowed to enjoy or appreciate Ender’s ingenuity at winning a contest, but told that his merciless calculation is exactly what they need. Imagine Nolan tackling The Hunger Games you’d never get the comic relief that Stanley Tucci, Elizabeth Banks or Woody Harrelson brought to it, which is desperately needed here.

Ender’s game is over by the end of Ender’s Game, so it just seems foolish to throw the title at us then. Hood just does it because that’s how Nolan does it, and Nolan’s movies make all the money. Maybe it’ll work. Who knows?

Oh, and in what’s clearly an attempt to avoid reminding audiences of Card’s recent campaign against gay marriage, the aliens are no longer referred to as Buggers.