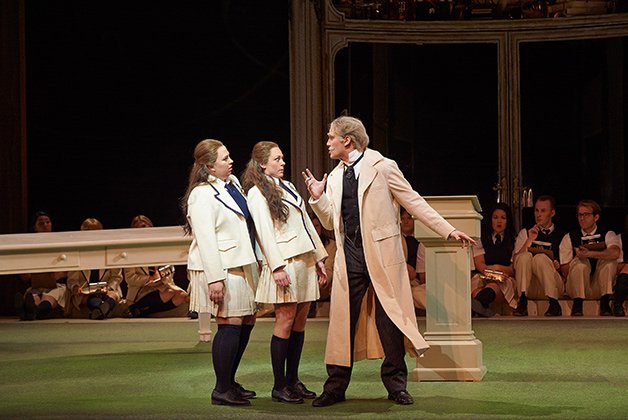 We’ve already offered our thoughts on Atom Egoyan’s production of Mozart’s Così Fan Tutte, most of them negative, but it took the Canadian Opera Company’s Ensemble performance on February 7 to show that, in the right hands, some of the staging can work.

Egoyan picked up on the subtitle of the work, The School For Lovers, and set his version in an academy for higher learning in which the majority of students, tutored by an older professor and a ladies’ maid, observe the quartet of mixed-up lovers at the story’s centre.

The young singers in the Ensemble found more fun and bubbly spirits in the production than the mainstage cast (who are fine singers, by the way). The Ensemble cast understood the impulsiveness, fickleness and extreme passions of the lovers, grounding the characters’ feelings in truth. The performance had humour and a touch of the bawdy that didn’t come through from the other singers.

Gordon Bintner brought a twinkle and flexible voice to Don Alfonso, the teacher who wagers with the impetuous Guglielmo and Ferrando that their fiancées, Fiordiligi and Dorabella, aren’t as faithful as their partners assume. Claire de Sévigné’s Despina, the worldly-wise maid, was a perfect flirtatious meddler and a good comic actor, too, her soaring voice helping to define Despina’s playfulness.

Because of the size of the Ensemble, the roles of the four lovers were split between eight singers, one group per act. Starting were Aviva Fortunata (Fiordiligi) and Charlotte Burrage (Dorabella), paired with Andrew Haji (Ferrando) and Cameron McPhail (Guglielmo). The women’s voices blended beautifully, and Fortunata’s creamy tones were a delight whenever she sang. Haji brought his own honeyed sound and heart to Ferrando’s music.

It’s really hard to start performing a work and then not finish it to complete the character’s journey. Equally difficult is beginning in the middle, with emotions and voices not yet fully warmed up to a role. No surprise, probably, that the second-act singers took a while to get into the spirit of the action. Sasha Djihanian and Danielle MacMillan brought a more girlish quality to Fiordiligi and Dorabella than the earlier singers Owen McCausland’s Ferrando was more fully realized than Clarence Frazer’s Guglielmo. On the whole, the foursome sang the music well enough but not until near the act’s end were their characters and relationships defined.

The COC is wise to give its young singers a chance on the Four Seasons stage, working with a full orchestra and asking to be measured against a production’s first cast. Artists always gain something, and audiences have a chance to see them early in their careers, before they go on to perform at houses around the world.

One of the best times we have in the fall is when the Young Centre turns into a big, multi-venue cabaret house for the Global Cabaret.

Noting that success, Soulpepper has programmed two themed shows to run this month, each looking at a specific time and place in 20th century music. The location couldn’t be better: performances are on the set for Idiot’s Delight, a hotel lounge complete with room for musicians.

First up is Berlin To Broadway, which draws on 20s melodies in Germany and the States and looks at how compositions in those two cities influenced musicians in both countries. Expect tunes by Brecht and Weill, Kander and Ebb and others (February 13 and 15).

Later in the month you can catch Aboard The Orient Express, with music that starts in 1939 London and moves across a Europe about to descend into war. The composers range from Purcell and Poulenc to Piaf and Tom Waits. Guests include Andrew Downing, John Millard, Patricia O’Callaghan and Gregory Oh (February 25 and 26).

A production of Tuesdays With Morrie, based on Mitch Albom’s relationship with his university professor, can easily sink into sentimentality.

But that never happened in Down n’ Out’s version at Campbell House, part of Winterlicious.

The two-hander, by Jeffery Hatcher and Albom and based on Albom’s best-seller, looks at the revived closeness between Mitch and Morrie, a sociology prof who takes an immediate shine to the young student at university it turns out to be mutual. After graduation, despite promises on both sides, they lose contact.

Sixteen years pass before Mitch sees Morrie, now diagnosed with ALS, on TV and pays him a visit. Mitch’s weekly journey between Detroit and Boston becomes part of his schedule until the older man’s death.

During that time Morrie again becomes an instructor – Mitch nicknames him “coach” – but this time in life (and death) rather than sociology, as he reminds respected sports reporter Mitch that being a full human being is about more than worldly success.

Under Stewart Arnott’s focused direction, Benjamin Clost and Terrence Bryant engage us from the moment they meet the chemistry between them, in Campbell House’s intimate ballroom, is palpable in their words and faces. Watching the sparkle, pain and tears in the actors’ eyes is a show in itself.

Their characters go through convincing journeys, too, Mitch moving from idealism to hurt and then to a different way of being in the world that includes compassion and forgiveness, of self as well as others. Morrie begins with a lightness in his (dance) step before moving into illness, his body slowly curling into itself as the ALS progresses. Morrie never loses his passion for life, though, and that’s the final gift he gives to Mitch.

Too bad the show closed Wednesday (February 12) it deserved a longer run and a larger audience.

Toronto has seen some fine productions of Stephen Adly Guirgis’s gritty plays, like In Arabia, We’d All Be Kings, The Last Days Of Judas Iscariot and Jesus Hopped The “A” Train.

Now indie company Unit 102 Theatre weighs in with another production of Jesus, first produced in 2000, where it was directed by the late Philip Seymour Hoffman. On until the weekend, it’s got a lot to recommend it, even if director David Lafontaine and the cast don’t always capture the work’s heightened tension and poetry.

Set in Rikers Island prison, it contrasts the experiences of two men accused of murder, Lucius (Ronnie Rowe), a born-again serial killer, and Angel (Andy McQueen), a man who’s shot a cult leader to help out a friend.

Orbiting around them are a couple of security guards and a public defender.

There’s lots of power in the two key discussions between the prisoners in the second act. But the rhythms in the first act are off, Rowe could add more layers to his poetic murder confession and Tommie-Amber Pirie has problems connecting to her lawyer character.

The charismatic McQueen is riveting and grounded, from his opening monologue through to the poignant extended passage that gives the play its title.

And the intimate space, with the sounds of street life occasionally bleeding through the walls, works well for the piece.

There’s lots of musical theatre talent in this country, and we’re not just talking about performers. There are brilliant writers and composers here, too. Now a new monthly workshop series is poised to showcase all that talent.

Musical Chairs, the brainchild of Esther Vallins and Kieren MacMillan, debuted last Sunday, February 9, at the Tranzac with a cabaret night featuring some marvellous Canadian songs, most of them from musicals.

The night was pretty informal, and it could have used a decent MC (MacMillan, also at the keyboards, did his best), some more entertaining patter and informative intros. Oh, and there could have been a bit more preparation, too – a couple of singers, especially early in the night, dropped lines, even with music on their stands.

But the spirit of the event is worth championing, especially when it lets audiences hear classic and lesser-known material from the likes of Jim Betts, Leslie Arden, Scott Christian, MacMillan, Jeremy Hutton, Paul Sportelli, Jay Turvey, Lisa Lambert and Greg Morrison.

Highlights included Ingenuity, the cleverly written duet from MacMillan and Hutton’s Robin Hood: The Legendary Musical Comedy, given lots of sass by Vallins and Kelly McCormack the poignant ballad Here I Am, from Christian’s Hero And Leander, performed by Kelly Holiff with clarity and emotion two delightfully inventive songs by Jill Léger, My Oscar Speech and Annie In My Room, sung by Vallins and Saphire Demitro respectively with showstopping panache and Lucky Day, a funny and moving song written by MacMillan and Hutton for a friend’s wedding, performed with brio by Jeremy Lapalme.

One of the musicals the series hopes to workshop in concert in the future is ToboR The RoboT, by MacMillan and Hutton. We’re looking forward to it, especially after two excerpts presented here which, performed by Demitro, John Chou, Vallins and Arthur Wright, were clever and touching little mini-dramas in themselves.

Musical Chairs continues on the second Sunday of each month at the Tranzac. Follow them @MusicalChairsTO.