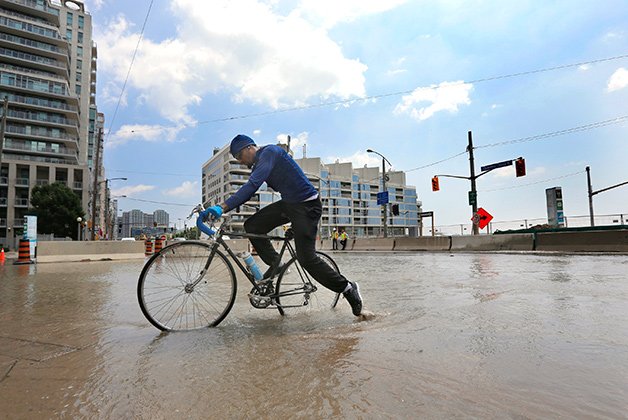 That means more severe storms like we’ve had in the last year. Dealing with large volumes of water in short periods of time will be the norm not the exception.

Luckily, Toronto already has a template for dealing with all this. It’s called the Wet Weather Flow Master Plan (WWFMP), a multi-faceted 25-year plan for tackling the coming deluges, officially launched in 2003 but only undertaken in 2006.

The bad news is that this program is years behind schedule and hundreds of millions of dollars short, despite 9 per cent yearly increases in the water rate for the last nine years. In fact, getting it back on track would likely require the city to commit to 9 per cent increases until around 2025, and perhaps beyond.

Two of these tanks are already in place in the eastern beaches, and plans are underway to install three more in the western beaches. These tanks and associated tunnels will be equipped with ultraviolet light to kill bacteria before wastewater is slowly released into the lake.

Other cities have been testing new ways of slowing the flow before stormwater gets to sewers. Some have made hard surfaces more permeable to reduce runoff. Chicago is taking a more radical step by experimenting with greening laneways, replacing asphalt and cement with soft surfaces. In Toronto, hundreds of kilometres of laneways could be converted to semi-greened surfaces.

Some cities are slowly changing their roads to porous asphalt or “high-albedo” pavement, which is lighter in colour to reflect more of the sun’s heat.

Another idea, previously discussed but not implemented in Toronto, involves the use of “bioswales” – unpaved lowered areas at the edges of streets or other large paved surfaces like parking lots that collect and hold rainwater for absorption into the ground.

Letting more water into the ground not only reduces demand on the system, but also helps trees that struggle in paved areas.

Seattle’s Street Edge Alternatives Project is probably one of the best examples. It combines the reduction of hard surfaces, the addition of permeable grassy swales and the planting of evergreens and shrubs. Monitoring shows that SEA cuts the volume of stormwater leaving these streets by 99 per cent. Seattle is now developing “green grids” that would deploy these techniques widely.

At the end of the day, municipalities will adapt to new climate patterns. Let’s not pay the cost of inaction on climate change, as we did with last year’s flood and ice storm.