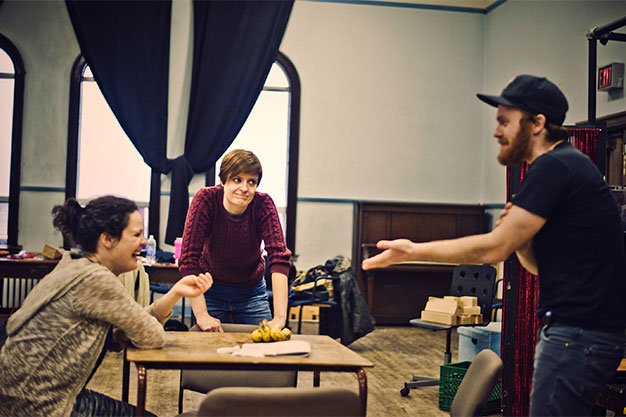 The world premiere of a script is usually a one-off, and theres no guarantee that it will get a second production.

But Byhalia, Mississippi, by Chicago playwright Evan Linder, artistic director of the New Colony, is going big, even supersized.

Eight companies across North America will present the work, five this week in full productions (by companies in Memphis, Charleston, Toronto and a pair of Chicago troupes), followed by three in staged readings (Birmingham, Boulder and Los Angeles).

Its really extraordinary to be included, says Jill Harper, artistic director of Cue6, the Canadian producer.

The company presented Kate And Sam Are Not Breaking Up a few seasons ago, which came out of New Colony, and Linder sent them his new script last year.

The typical track for a new American play is to have the right company stage it first, then the next right company until, ideally and eventually, it ends up in New York, says Harper. Evan was tired of that route and wanted to see what would happen if he werent protective about who launched a play, but instead opened it up for a super-premiere.

And we were happy to be part of the package, which will be wrapped up January 18 with an online talkback involving artists and audiences from all seven cities. (See details at wpconvo.com.)

Set in the small town of the title, the play focuses on Laurel and Jim, a young couple about to become first-time parents. The happiness anticipated by them, their friends and family sours when the baby turns out to be black, the result of Laurels earlier affair.

Theyre very much in love and consider themselves white trash, but thats not a derogatory word where they come from, explains Harper, who directed Cue6s fine production of pool (no water) in last summers Fringe.

Theyre loud, crass, without airs and proud of who they are. The person who has trouble with their lives is Celeste, Laurels mother, who wants something better for her daughter.

The other two characters are black: Karl, Jims best friend, and Ayesha, an important figure in town whos known Laurel for years.

This play is about modern-day racism, which tends to be casual and subtextual rather than overt, notes Harper. In many ways, thats far more poisonous. People in Byhalia want to believe that racism has disappeared, just as many viewers do.

But as we work on the script, were discovering that its filled with little examples of offhand racism, characters not being aware of whats behind their words. Early on, Jim and Laurel see nothing wrong with having a native American as the high school mascot later Jim assumes, without thinking, that Karl knows who the babys father is, simply because Karl is black.

Harper sees the scripts intentional use of subtle racism as one of its most effective elements.

Byhalias actual history includes a 1970s incident, cited in the script, when a young black man whose hands were tied behind his back was shot by a policeman. Depicting that sort of extreme violence, which is still happening in the States and Canada, allows a plays audience to go, Its horrible, but Id never be part of it.

But here were dealing with little human interactions, touches of racism, and those moments allow viewers to see themselves in the characters. Its important to point out those small, less overt moments of prejudice were still guilty of, even in Toronto, even now.