A trio of indie-theatre-artists show off their. 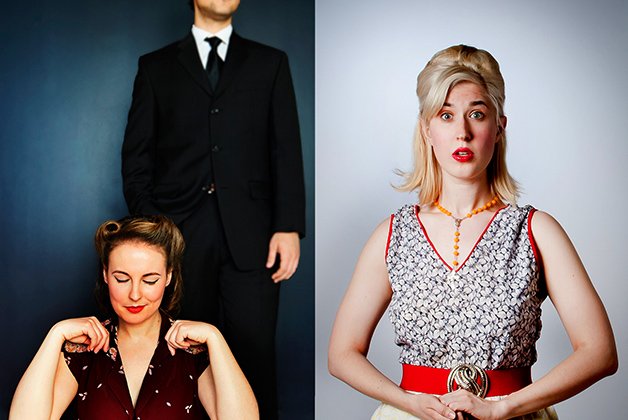 A trio of indie-theatre-artists show off their talents this week with a new work, a revival and a production and reading of works by sharp-edged American playwright Neil LaBute.

Convection Productions and Peanut Butter People had to cancel their double bill of Brooke Banning’s Swell Broad and Laura Anne Harris’s The Homemaker last winter when their venue was flooded.

They’re finally getting the shows up at the Storefront Theatre, ironically another space that had to close for a time due to water damage.

Swell Broad, set in the 50s, looks at the unusual relationship between Stuart and Delilah. She’s a witty woman with a reputation for being cold toward men and attitudes about love and relationships that don’t sit well with people. When Stuart finds himself emotionally involved with her, they both question their ideas about romance.

Another period piece, The Homemaker, looks at a 1960s French-Canadian housewife from Saskatchewan who turns her kitchen into a theatre to enact flashbacks from her life. The show, which ran briefly in last summer’s Fringe, draws on folklore from Harris’s family.

The playwright has an artistic hand in both shows, as solo performer in The Homemaker and director of Swell Broad, which features Janelle Hanna and Philip Furgiuele. Morgan Norwich directs The Homemaker.

The LaBute Cycle stages Neil LaBute’s reasons to be pretty, one of the three plays (the others are Fat Pig and The Shape Of Things) that make up the playwright’s “beauty” trilogy, examinations of today’s consumer-society obsession with physical attractiveness.

It involves a quartet of working-class friends and partners who become unhappy with their lives and each other as they start to question their feelings about physical beauty.

Despite LaBute’s reputation for misogyny, there’s a richness to the characters and their emotions.

The troupe also offers a pwyc staged reading of Fat Pig on April 13. The play looks at a businessman and a plus-sized librarian whose relationship becomes rocky when his friends don’t accept a girlfriend who doesn’t fit the model of attractiveness.

Though the artists have come together as a new collective for this production, you’ll recognize some of them from their work with Shakespeare BASH’d and Theatre Caravel.

Dancemakers is moving around – and we’re not just talking about their current show, Around, which wraps up its run this weekend.

On Thursday, April 3, the 40-year-old modern dance institution announced a brand new operating model. It’s changing its focus from an artistic director-led company to one that brings in choreographers or small companies for three-year residencies in which they will create two full-length works.

The organization, helmed currently by Michael Trent, is now seeking submissions. Check out its website (dancemakers.org) for details.

The news coincides with Thursday’s 40th Anniversary Fundraising Gala, appropriately subtitled “past, present and future.” It includes dinner-style apps and drinks, an exhibition of archival materials and a performance of their current show, Around.

We recommend the imaginative, experiential show, which feels more like a performance installation than dance.

Created by Trent and the performers, it’s a work that draws on many of the senses – not just sight, but also smell (a very subtle use of incense) and especially sound. We don’t want to give away any surprises, but let’s just say there’s clever, whimsical use of microphones, whether they’re on the floor, wrapped up and put in dancers’ clothing, or – in one scene bristling with danger – being whirled around, letting us hear a fascinating, rustling soundscape.

As with most recent Dancemakers shows, you need to keep your mind and senses open to whatever it offers. In return you’ll be rewarded with some striking imagery: a dancer playing an electric guitar with his face a group sequence in which dancers are almost daring themselves to get close to each other without touching and the slightly uncomfortable experience of not knowing what will peek out of those curtains.

Around continues until April 6. See listing.

Hard to believe that the Paprika Festival is now a teenager.

This year marks the 13th anniversary of the festival devoted to works created and presented by young artists between 15 and 25 it’s currently led by artistic producer Dan Daley. Starting this year Paprika, running from Monday (April 7) to April 12, will rotate annually to different venues. The 2014 festival is being held at Theatre Passe Muraille next year it travels to the Theatre Centre.

Each night begins with a free 6 pm reading of a script by one of three playwrights-in-residence: Bilal Baig, Glenys Robinson and Erin Tran. That will be followed by different double bills at 7 and 9 pm, and the evening finishes with a cabaret series featuring music, dance parties, karaoke and other presentations.

When you’ve got mad hot skills like Gabi Epstein, perhaps you don’t feel the cold, even during a polar vortex.

Now the Dora Award-nominated performer brings the cleverly titled The Cold Never Bothered Me Gabaret to the Jazz Bistro.

The star of Dani Girl, Fiddler On The Roof and a much-buzzed-about one-night-only performance of Funny Girl is one of the city’s best cabaret artists, and she promises songs and stories about love, loss, Rob Ford, the Oscars and the endless winter.

Expect her vocal and dramatic heat to spread when she and pianist Mark Camilleri perform Sunday (April 6) at 7 pm. jazzbistro.ca.

SummerWorks is again holding the popular SummerWorks Leadership Intensive Program (S.L.I.P.), a two-week workshop for emerging artists, with a focus on the business of arts professionalism.

The program, running August 5 to 17, offers emerging artists and arts workers various perspectives on producing and how to approach an artistic career from a practical business point of view.

Past sessions with visiting speakers have looked at professional etiquette, marketing, publicity, grant writing, fundraising, touring, financial planning, artistic direction and, something young companies often have to deal with, how to do everything at once.

Each participant is paired with a mentor working in the current festival. The group has the chance to see many of the productions in SummerWorks and discuss them with the artists involved.

The ideal candidate is an artist interested in producing, the business of the arts and artistic leadership but not yet experienced in these areas. She or he may either have just graduated from a post-secondary theatre, dance, music or visual arts program or been involved in the arts since graduating no more than three years ago.

This year’s program facilitator is actor and administrator Joseph Recinos.

Theatre Passe Muraille is moving in a new direction next season, opening with a show that it plans to tour nationally between 2014 and 2016.

The concert/theatre hybrid, Life, Death And The Blues, created and performed by Raoul Bhaneja, opens the Passe Muraille season next fall in association with Hope and Hell Theatre Co. Also involved in its development and presentation are Canadian R&B/soul singer Divine Brown, Bhaneja’s blues band, The Big Time, and director Eda Holmes.

The production blends autobiography, interviews, live music and multimedia to examine the power and passion of the blues.

Following the Toronto run, the show will tour to Winnipeg and Edmonton next season, with plans to visit Fredericton, Vancouver, Calgary, Saskatoon and Montreal in 2015-2016.

Theatre Columbus reaches out to local parishes to present its first Minister’s Play, a funder aimed at raising money for the company’s play development program.

The initial presentation is a stage version of the BBC series The Vicar Of Dibley, which follows the adventures of a female vicar in a small English town. Dawn French starred in the TV series.

The cast for the local show includes 11 Anglican and United Church ministers, directed by Jennifer Brewin and Jenny Salisbury with Colin Doyle.