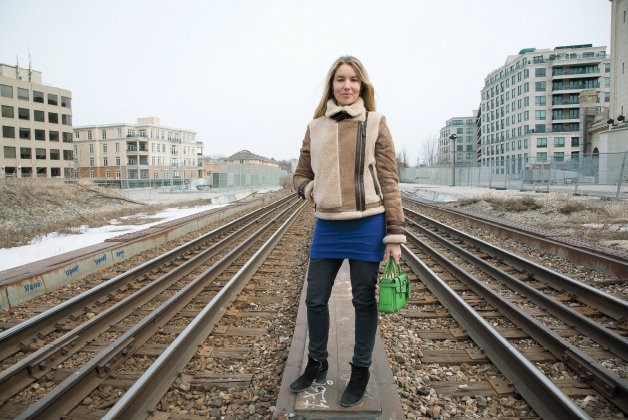 Ken Brown has lived near the Canadian Pacific stretch of tracks between Avenue and Yonge for 42 years.

Since the 72-railcar explosion in Lac-Mégantic, Quebec, that killed 47 people last summer, he’s noticed something unnerving: an increase in DOT-111 tankers carrying oil through the neighbourhood. In fact, those railcars that derailed in Lac-Mégantic, carrying highly volatile Bakken oil from North Dakota, came through Toronto en route to that disaster.

Brown has counted at least two trainloads of oil with 100 cars each passing through Toronto every day.

Any attempt to get hard information about the amount of oil or any other hazardous material being transported by rail through Toronto, and how often that happens, is a dizzying game of ping-pong with government agencies embarrassed because they don’t keep those records.

Nichole Anderson, another concerned trainspotter who lives within a kilometre of the tracks, says, “As soon as you start looking into [rail safety], you realize that there are no regulations whatsoever.”

Anderson, who is part of a residents’ group formed with area councillor Josh Matlow, says there’s “no logic for shipping hazardous waste [or] crude oil through the densest population in Canada or in any other city.”

The group met recently with a CP official to discuss options for rerouting the crude-filled rail cars.

Matlow says, “It was clear he was there to neutralize us.” According to Matlow, the CP rep simply reiterated how safe the rail lines are and did not address the lack of communication with the community.

Matlow, who plans to form a liaison group with MPs and other ward councillors to address residents’ concerns, says locals have a right to be part of the discussion of rail safety “rather than simply being subject to the decisions of unelected and unaccountable bodies.”

In November, Minister of Transportation Lisa Raitt issued a directive to rail companies to share information yearly about the transportation of dangerous goods.

Nevertheless, there’s been very little movement by the rail industry or the Canadian government.

Claude Dauphin, president of the Federation of Canadian Municipalities, has been working with his 2,000 member communities on emergency response plans.

He recognizes that getting information from the rail companies about their cargo after trains have passed through town doesn’t help with day-to-day emergency preparedness, but he says, “We had to start somewhere.”

Dauphin says same-day notification would be “ideal,” but since the Lac-Mégantic disaster the companies have argued that “security concerns” prevent them from sharing that information.

The difficulty with rail, he says, is that constitutionally it was “granted all these extraordinary powers because at that time building the rail lines was about constructing the country, and so right now they’re still almost completely impervious to outside regulation apart from the federal government.”

Stewart, too, has noticed an increase in DOT-111 tanker traffic on the CP tracks running through his Dupont-and-Dufferin neighbourhood in the last five years.

“There’s been a huge increase, and that’s been done with no oversight,” he says. “All you have to do is watch the train tracks. If you see the cars are DOT-111 tankers, you know they’re filled with oil.”

For 20 years, the TSB has commented on the vulnerability of DOT-111s because of their thin hulls, among other things. But a phase-out plan currently under way means they’ll be in use for another 10 years.

One problem with Alberta oil is that it’s landlocked. Much like tarsands oil, that leaves our options stuck between a rock and a hard place.

“Producers say, ‘If you don’t give us the pipelines, then we’ll transport it by trains,'” says Guilbeault.

Both the National Energy Board (NEB) and Transport Canada have standards and regulations in place for the safe transportation of crude, but it’s the oil and rail companies’ responsibility to maintain their equipment, monitor and report spills. It’s not clear which federal body takes responsibility for enforcement. Chief NEB engineer Iain Colquhoun says, “he’s not surprised that’s confusing.” There are “no stated requirements” for testing the stability of pipelines. “Companies have to continually assess the integrity of the pipeline.”

This was a central issue in the recent fight to stop Enbridge’s Line 9, which runs from Sarnia to Montreal through north Toronto, across parts of the Humber, Don and Rouge river valleys. Hydrostatic pressure testing to see if there are breaches was not required for the nearly 40-year-old line.

Hydrostatic testing is the “preferred method” for assessing pipeline integrity, Colquhoun agrees, but it’s only required for new pipelines.

As with DOT-111 railcars, the material used to construct pipelines is also at issue. Most are made of carbon steel. Colquhoun says stainless steel would be more reliable, but it costs more and is hard to weld.

If pipelines were made of stainless steel there would be fewer safety concerns, Guilbeault agrees, but the choice between rail and pipelines is lose-lose. Younger people are already moving away from oil dependency.

Of course, ending oil dependency is the ultimate goal.

In the meantime, thin pipeline walls and aging railcars are all that are protecting our Great Lakes and downtown Toronto from flammable, poisonous crude.