Barely 50 days into the parliamentary session and pundits in the Ottawa press corp are declaring the politics on the. 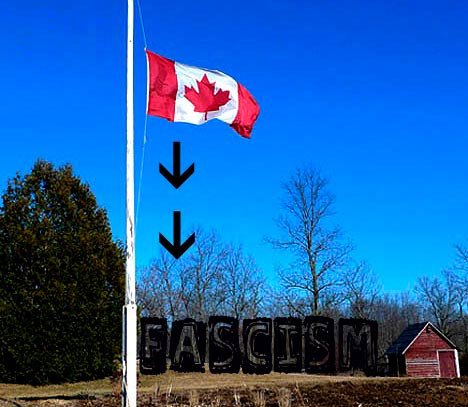 Barely 50 days into the parliamentary session and pundits in the Ottawa press corp are declaring the politics on the Hill O Beans poisoned.

Difficult not to agree when a “fuck you” tweet from an opposition member of parliament garners more attention than the government of the day moving – yet again – to invoke closure on a raft of bills to push through its agenda.

But I’m with the right-wingnuts (sort of) on this one. What did critics expect? The HarperCons have their coveted majority and so, have won the right, or so the theory goes, to govern as they see fit.

Parliamentary democracy is not supposed to work that way, of course. Winning an election only grants a party the right to govern. Majority governments are not supposed to rule by fiat. Presumably, they still have to make the case for their legislative agenda once in Parliament.

Did everyone, for example, who voted for the HarperCons in the last election vote to spend more on prisons when crime is at an all-time low? Or billions on fighter planes at the expense of veterans’ pensions? Or abolishing the long gun registry? It’s doubtful. I distinctly remember jobs and the economy being the Cons’ number one priority. The HarperCons did rethink their timetable for slaying the deficit in the face of the current world financial crisis.

But anyone who thought the Reformatories were going to play nice now that they’ve got all the marbles, were living in dream land. Stephen Harper believes conservative values are Canadian values, and will govern accordingly. This is to say, governing with a view that ensures every political move meets that ideological standard.

The perils of majority government are that, depending on who’s in charged, it can look an awful lot like a dictatorship. However, with the current concentration of media ownership, which is decidedly very right-of-centre, you’d never know it . Those who shape public opinion, with few exceptions, seem more in lockstep with the government than keen to challenge the status quo.

It’s unnerving just how thoroughly the right now controls the levers of propaganda, or, public opinion, in Canuckistan. Make no mistake – Harp has had a hand in that tweaking regulations to allow Conservative-friendly buds in the media biz, like the Aspers, for example, to buy up more and more media properties. The PM’s name also came up in various news reports linking him to the Sun News Network’s efforts to acquire a Category 1 license from the CRTC (Canadian Radio-television Telecommunications Commission.) His former director of communications was leading that effort.

Call it convergence. Call it a vast right-wing conspiracy. Or, call it a further descent into fascism. I think I hear the thump of jackboots in the distance. Before you call me crazy for dropping the f-bomb consider, if you will, Alberta MP Brian Storseth’s private member’s bill to repeal sections 13 and 54, of the Canadian Human Rights Act – in the name of free speech, no less.

Section 13 currently prohibits communication by telephone or on the Internet of “any matter that is likely to expose a person or persons to hatred or contempt.” Section 54 prescribes financial penalties for anyone found in contravention of the Act. Current critics, many of them supporters of the current government, say the sections have been used to file frivolous or vexatious complaints. They’re talking mostly here about Muslim groups of late against right-wing commentators who trade in Islamophobia . (More on that later.)

But the Act in the past has been effectively used to stop the likes of Holocaust denier Ernst Zundel and his ilk. The sections Storseth’s bill is seeking to repeal, in fact, have been instrumental in marginalizing the threat of neo-Nazi groups like the Heritage Front, Aryan Nations, the Ku Klux Klan and others in Canada online.

Which is why Jewish groups, even conservative-minded organizations like B’nai Brith, are a little nervous about the proposed changes. B’nai Brith issued a statement Friday calling Storseth’s bill “premature” and “ill-timed,” noting two cases before the courts right now that will be pronouncing on the constitutionality of those very provisions in the Human Rights Act Storseth’s bill is proposing to remove.

One of the cases, before the Federal Court of Canada, involves Marc Lemire, self-described “human rights victim” and operator of freedomsite.org, who, in a previous incarnation, also ran the website of the Heritage Front, the neo-Nazi outfit headed by former Klansmen Wolfgang Droege. Lemire was the Front’s president for a time.

B’nai Brith CEO Frank Dimant says that “Wiping out one remedy for hate on the Internet without careful review of all the consequences, opens floodgates that may later be difficult to close.”

Truth is, B’nai Brith is in a tough spot on this one. It has publicly expressed its own reservations about sections 13 and 54 of the Human Rights Act. B’nai Brith’s concerns stem from the fact that Muslim organizations have used the Act to bring their own complaints against B’nai Brith. The “new anti-Semitism,” B’nai Brith calls it.

Neo-con commentators in the media have also been targeted by Muslim organizations under the Act. Among them is Mark Steyn, for an excerpt from his book published in Macleans in 2006, in which he suggested Muslim birth rates are “a threat” to the West.

Sun TV’s Ezra Levant, has also been prosecuted under the Act. As publisher of the Western Standard, he ran the same cartoons of the Prophet Mohammed that sparked riots in Europe back in 2007.

Levant, not so surprisingly, was among the conservative commentators who hailed Storseth’s bill, proclaiming it “the best thing the Harper government has done in five years.” He’s called human rights tribunals “kangaroo courts.”

Immigration minister Jason Kenney, whose own pronouncements on issues of race and human rights have bordered on the scandalous, has joined in the cheerleading. (For more on how these two jokers are helping the cause of white supremacists, look here.)

Private members bills usually have little chance of passing, but Storseth’s has the blessing of the Justice Minister, Rob Nicholson, who rose in the House Thursday to say the Conservative government “does not believe Section 13 is an appropriate or effective means for combating hate propaganda.” Nicholson says the Criminal Code offers enough protection against hate crimes.

That’s patently false. The legal threshold to bring hate charges under the Criminal Code is much higher. The Attorney General has to sign off on those. A simple change to the Human Rights Act to award costs to the targets of complaints would go a long way toward discouraging vexatious claims, a remedy B’nai Brith has suggested.

Conservatives argue that the changes Storseth’s bill proposes are in the name of free speech, as if free speech is the life blood of our democracy. It isn’t. Tolerance is. Check the history books. The greatest atrocities in the world did not begin with censorship. They began with hate speech.