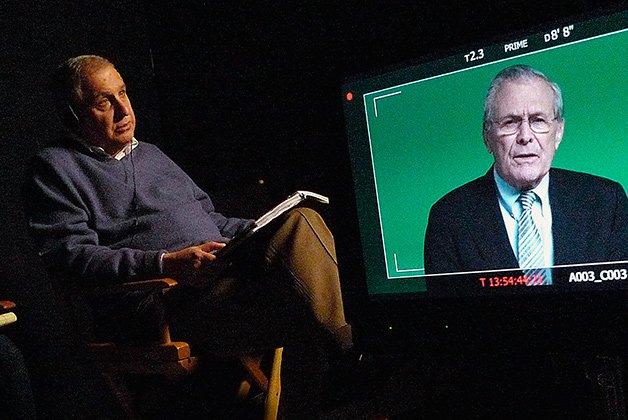 Talking to Errol Morris about Donald Rumsfeld isn’t easy, but I get the sense that talking to Rumsfeld wasn’t exactly a walk in the park for Morris either.

His new documentary, The Unknown Known, is a feature-length interview with George W. Bush’s first secretary of defence, the man responsible for the sanctioning of torture at Guantánamo Bay and Abu Ghraib, among other terrible things.

But although Morris spends the whole picture confronting Rumsfeld with the awful consequences of his decisions, much as the filmmaker did with Robert S. McNamara in 2003’s Oscar-winning The Fog Of War, this time the results are different.

Rumsfeld never cracks, maintaining a level of pissy confidence in his own bullshit that would impress Doug Ford.

In the movie, Morris’s disbelief and anger at Rumsfeld’s evasions can be heard in his voice. That couldn’t have been easy, I say.

“There’s this desire, certainly on the part of people watching this film, for me to act out for them,” he says. “That I should jump out of my chair and grab him by the neck.”

I admit I had that same impulse. But in the face of such stunning self-deception, what other response is possible?

Morris says it was the evasiveness that drew him to Rumsfeld in the first place. That he could set up the conditions at Guantánamo and Abu Ghraib – and other sites that have yet to be exposed – and then blame the torture and abuse on “a few bad apples.”

“They made it stick with both the left and the right, which I find amazing,” Morris says. “When Sabrina Harman took her first pictures – pictures of people standing in their own urine, people in stress positions, people with women’s underwear over their heads, nudity – he tells you how appalled he was. ‘Wait a second. You just read the Haynes memo where you authorized all of that.'”

Rumsfeld seems like a textbook sociopath to me – he depersonalized an entire subcontinent in order to wage war in the Middle East – but Morris isn’t willing to say the word.

But, I suggest, it’s a job that comes with responsibilities, and he’s avoided those.

“I think he has a remarkable ability to deflect blame away from himself, yes,” Morris says. “I don’t think he worries about a moment of reckoning.”

Isn’t that… well, isn’t that what we’d define as evil?

“You can capture the absence of something,” he says. “I hate to bring Hannah Arendt into this, but here’s the one line. I researched ‘the banality of evil’ because I got into an argument with a journalist friend of mine, and the best explanation from Arendt of the banality of evil is, she said it was the absence – not the presence – of thought. So there you go. Apply it in this instance as you will.”

Errol Morris on the contradiction of Donald Rumsfeld:

Morris on something he’d really like people to understand: