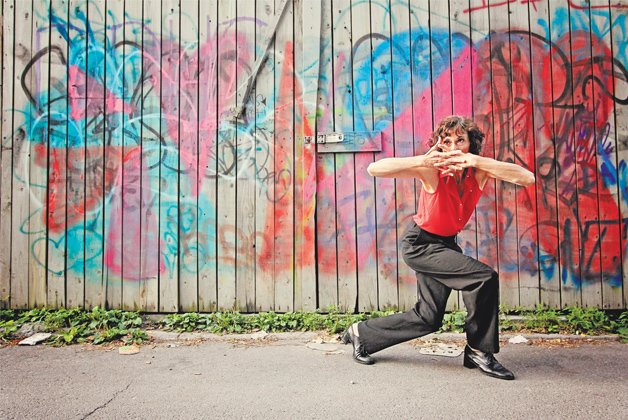 As you enter the theatre for Escape Artist, the house lights are up but the performing area is in shadow, and Claudia Moore is already on the dance floor, executing some moves or perhaps warming up. That’s a fitting image for an artist who, at 60, remains as active as ever.

She and her production company, MOonhORsE Dance Theatre, commissioned four choreographers from different generations to create solos for her, and while there’s not much range in the program, she is always watchable.

Susanna Hood’s Beside You opens with promise, contrasting Moore’s natural elegance – a red blouse sets off her beautifully long arms – with the fierce animal energy contained in her lithe body. There’s a spare use of props and costumes, and movement that evokes traditional masculine and feminine behaviour – nice to see a fluttering hand represent an old-fashioned fan. But Hood needs an editor. The piece loses tension and soon comes to resemble a series of improvisatory exercises.

Christopher House’s Archival Feints is more cohesive. Here Moore is the seductress, the grande dame, posing like a model and working her way through some ballet positions. A final sequence in which one of her feet taps steadily while she runs her hand through her hair could be a statement: I’m not going anywhere, folks.

Paul-Andre Fortier’s Broken Lady takes us into a poetic universe where Moore could be the heroine of a Virginia Woolf novel – restlessly navigating her space, longing for something unspoken as a mysterious apocalyptic event occurs around her.

My favourite is the final piece, Sylph(a), by Gadfly’s Apolonia Velasquez and Ofilio Sinbadinho. Clad in a white dress, Moore appears younger than ever as she joyfully sculpts an entire universe out of the air with her limbs, all to the shimmering, lyrical piano music of John Lang.

I’d love to see a fuller work for her by these rising stars of the modern dance world.