BORN TO BE BLUE written and directed by Robert Budreau, with Ethan Hawke, Carmen Ejogo, Callum Keith Rennie and Stephen. 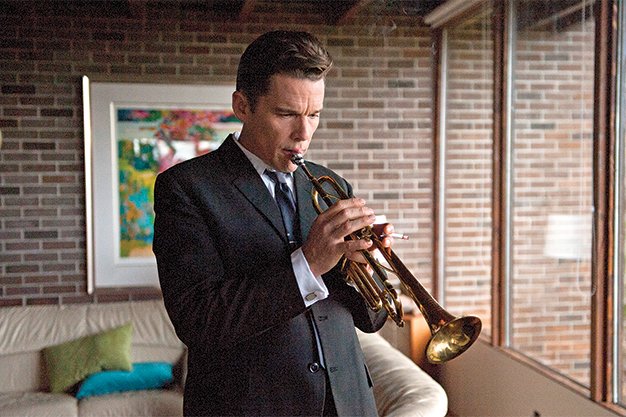 In Robert Budreaus Born To Be Blue, Ethan Hawke disappears into the role of dissolute jazz legend Chet Baker. Its a terrific performance, and an almost daring interpretation of a famous cultural figure. But during a recent visit to Toronto, Hawke tells me Budreaus strategy was to play down the legend stuff and just treat Baker as a character.

Most people dont know who Chet Baker is, he explains, and the movie should [still] work if we named him Jim. It should be an interesting movie no matter who it is.

Hawke says Budreau cited Raging Bull as an example of the kind of story he wanted to tell, because Martin Scorsese was more interested in the soul of Jake La Motta than in his accomplishments as a boxer.

Its the bar if youre doing a biopic, Hawke says. Most biopics are simply launching pads for an actor to do a showy performance and make a forgettable movie, and thats what we really didnt want to do.

Born To Be Blue focuses on just a few years in Bakers life, starting in 1968, when a beating left him with his teeth smashed and lips lacerated, and ending with his shift into vocal performance with his unforgettable cover of My Funny Valentine.

By picking this one sliver, the period when he lost his teeth, you get to deal with a lot of aspects of the legend of Chet Baker, Hawke says.

Hes right. Budreaus film takes place during a time in Bakers life when everything was in play: his mu-sic, his heroin addiction, his romantic and professional aspirations.

Hawke says the movie came together through the best kind of happenstance. Budreau dropped off the script at Hawkes hotel when the actor was in Toronto filming the Alejandro Amenabar thriller Regression, which opens next month.

If I wasnt working here, it probably wouldnt have happened, Hawke says. I was away from my family and everything, and I had a lot of downtime. Id say, Meet me at 6:30 when I wrap here at this bar, and lets talk about this part. And the more I talked to him, the more he showed me other drafts of the script, how his brain worked, what he was trying to make the movie about and why it was important to him.

Hawke, it turns out, had been fascinated by Baker long before Budreau came along.

Id developed my own Chet Baker movie years ago with Richard Linklater, he says. Id already prepped this part 12 years before. The movie fell out, and I got too old for that script it was a different period in Chets life so I sat down and read [Born To Be Blue] and I was really touched by it. Having prepped a movie of Chet at 24 I was almost 30 when I was doing it I was already too long in the tooth when we started working on it.

Now here I was meeting Chet again in his 40s. And I was in love with it.

See our review of Born To Be Blue here.