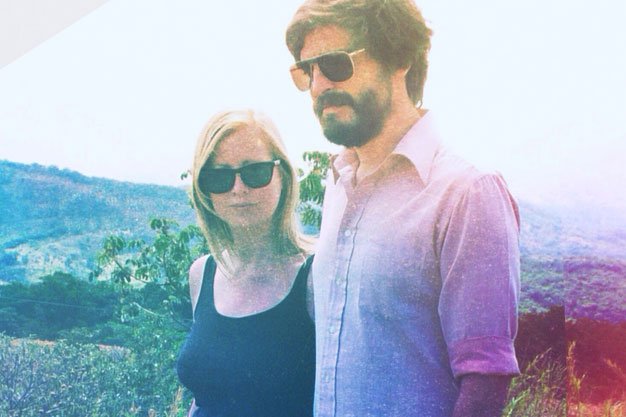 Two weeks from Etiquette‘s release party, Graham Walsh and Julie Fader – the principals of the electronic pop project – are patiently waiting for their vinyl test pressing to arrive.

We’re in their quaint home at Ossington and Dupont, and as the time passes with no delivery in sight, they’re coming to terms with the possibility of a release party without their debut full-length, Reminisce (Hand Drawn Dracula).

It’s either that or, as Fader says, “We’ll be stuffing vinyls into sleeves the afternoon of. But that’s the way this stuff always goes.”

While this potential setback might throw off another band, it doesn’t seem to faze Walsh or Fader, maybe because they’ve been doing this for a long time. Fader released a solo folk album in 2009 and has performed alongside Sarah Harmer, Chad VanGaalen and Great Lake Swimmers. Walsh is a member of decade-old electronic-punk trio Holy Fuck.

Or more likely it’s because Etiquette itself was born out of a happy accident.

Two years ago, the couple escaped to the farmhouse studio of Blue Rodeo’s Greg Keelor to record Fader’s long-awaited sophomore album. But while capturing demos, most of which revolved around fingerpicked acoustic guitar, Fader and Walsh realized something wasn’t quite working.

“The songs sounded beautiful but they weren’t sitting right,” Fader says. “I couldn’t articulate what was frustrating me, and at the end of the day I realized it was because I wasn’t feeling excited about it.”

Walsh felt the same way, so when the couple returned home with an album’s worth of songs, he decided to strip one of tracks back to just Fader’s vocals and start from scratch.

Armed with a tableful of synths, Walsh set to work reinterpreting the melodies, instrumentation and overall vibe. The final result is a synth-heavy minimalist electronic album with Fader’s blissful vocals counterbalancing the lush palette.

“With Holy Fuck, it’s about density and energy,” Walsh says. “With Etiquette, there’s a lot more space and breathing room. I really thought about the sound of the instruments, the melodies, the hooks, and dialed everything back.”

“At first I teased him, like, ‘Wow, you’re taking some liberties here,'” Fader says. “But as soon as I heard where he was going, I said, ‘That is how I want the record to sound.'”

Besides renovating their home and raising their three-year-old daughter – who, yes, has blurted out her dad’s band name – Walsh and Fader can add Reminisce to their other successful collaborations.

“I love contributing from the next room,” says Fader. “I can hover a little bit, the over-the-shoulder contributions. I love when I’m in the kitchen listening in, chopping onions and garlic and shredding ginger. I can yell into the dining room, ‘I love that!'”