Eugene Jones out as TCH head 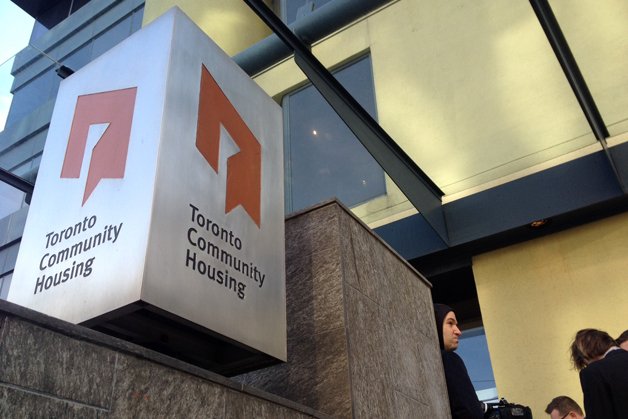 He offered his resignation to the TCH board Friday, and through a settlement negotiated by his lawyer will walk away with $200,000 plus legal fees and benefits.

Jones was brought in to stabilize the organization but leaves the agency in disarray less than two years after he was hired in June 2012.

TCH board chair Bud Purves made announced Jones’s departure at noon on Friday following a closed-door meeting at the agency’s Rosedale headquarters, saying it was a mutual decision.

Some TCH residents in attendance heckled Purves when he made the announcement, shouting “shame!” and “Judas!”

One of the hecklers was Bonnie Booth, who lives in a TCH property at 20 Sanderling Place. She said Jones was beloved by tenants.

“He listened to us. He really valued us and cared about us,” she said. From her perspective she’s seen “big change” at TCH developments under Jones’s tenure. “Things are clean now.”

Other tenants supported Jones’s resignation. In a deputation to the board John Brochet, a resident at the TCH’s Central Sherbourne development, said the board’s decision “was the only logical one.” He argued that many of the employees fired under Jones were competent workers and their dismissal had weakened the organization.

“These are people who had great expertise,” Brochet said. “When we lost those people this company started to go on the rudders.”

Jones was not at the meeting and his lawyer Soma Ray-Ellis said he would not be available for comment.

Speculation that Jones’s job was in jeopardy began on Tuesday after the release of the city ombudsman’s report that detailed a litany of policy breaches under his tenure. The report determined that he repeatedly flouted human resources procedures by doling out raises and promotions arbitrarily, hiring people without conducting interviews or opening jobs up to competition and making staffing changes without proper agency oversight.

When Jones’ executive assistant’s salary topped $100,000, the former CEO directed staff to alter pay records so that it appeared she had been paid less, the report found. In another case he gave a manager a $30,000 raise and promoted her to a position that had no job description, without any formal evaluation of her performance.

In an 18-month period beginning with his hiring in June 2012, there were 233 staffing changes, and 41 TCH employees were dismissed without cause. The firings resulted in the agency paying out $1.6 million in severance last year.

Crean wrote in her report that the improper HR moves “could very well have wasted taxpayers’ dollars.”

Mayor Rob Ford, an ardent supporter of Jones, arrived at TCH shortly before Purves’s announcement and afterwards slammed the board’s decision as “ridiculous.”

The mayor defended Jones, describing him as a “great man” whose departure will only hurt social housing tenants. He attacked Crean’s report as “biased” and “political” and said she, not the CEO, should have stepped down.

“She’s the one who should be embarrassed. She caused this problem,” Ford said.

The mayor said that under Jones, TCH was operating better than ever before. He accused Crean of undoing the good work the former CEO had done.

“It’s like taking a world championship team and saying, we’re getting rid of the whole team because one fan said, ‘You have a bad team.’ And unfortunately that one fan is Fiona Crean,” he said.

The mayor vowed to try to rehire Jones if he’s re-elected in the October 27 election. “On October 28th, I’m going to do everything in my power to get him back here,” he said.

“There is certainly division in the tenant community. So I’m hoping we can reach out to them soon and assure them” this was for the best, she said.

The councillor said it was difficult to accept Jones’s resignation, but that it was the right thing for the agency. “Nobody feels good today,” she said. But “I’m very confident that the board made a decision that is good moving forward.”

Other councillors were more pointed in their criticism. Joe Mihevc described Jones’s leadership as “authoritarian.”

“He felt he had too much power and did not use it wisely, and certainly did not follow directions and policies,” said Mihevc, who doesn’t sit on the board. The councillor said he was startled by the high number of staffing changes under Jones. “That is not a change agent. That is a crash-and-burn agent.”

Jones’s exit marks the latest dubious chapter in the history of TCH, which has been in turmoil since at least 2011 when Mayor Ford engineered the removal of the previous CEO and board following a controversy over spending at the organization. The core issue at the time was what Ford considered a spending spree – the TCH paid $40,000 for a Christmas staff dinner and $1,000 for Holt Renfrew chocolates that it gave as gifts.

TCH continues to struggle with a growing repair backlog that hit $862 million last year and a waiting list that has reached nearly 168,000 people.

Greg Spearn, TCH’s chief development officer, has been appointed interim president and CEO until a permanent replacement is found.

TCH is Canada’s largest landlord and houses 58,500 low- and moderate-income households in 2,200 buildings across the city.